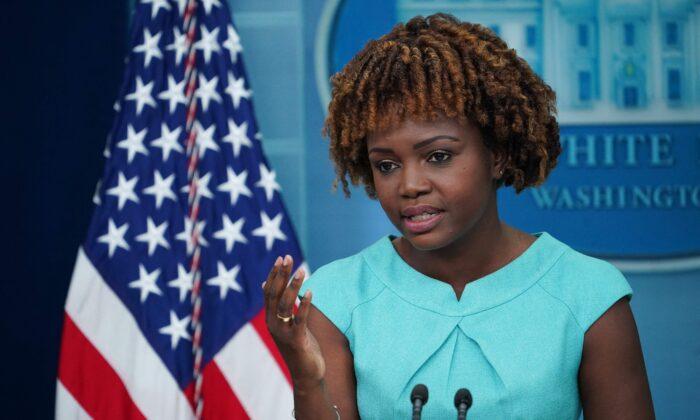 White House press secretary Karine Jean-Pierre on Sept. 6 defended claiming in the past that the 2016 election was stolen.

“Reminder: Brian Kemp stole the gubernatorial election from Georgians and Stacey Abrams,” Jean-Pierre wrote on Twitter in 2020, referring to the claim that Kemp cheated Abrams in the 2018 Georgia gubernatorial race.

Peter Doocy, a Fox News reporter, asked Jean-Pierre on Tuesday about the 2016 election during a White House press briefing.

Doocy then referenced Jean-Pierre’s Twitter posts—the first time Jean-Pierre has been confronted with them since she became press secretary on May 13.

“If denying election results is extreme now, why wasn’t it then?” Doocy wondered.

“Oh, I knew this was coming,”  Jean-Pierre said. “I was waiting, Peter, when you were going to ask me that question,” she said, laughing.

Jean-Pierre, a former CNN commentator, then defended her posts.

“Let’s be really clear that that comparison that you made is just ridiculous,” she said. “I was talking specifically at that time of what was happening with voting rights and what was danger of voting rights. That’s what I was speaking to at the time. I have said Gov. Kemp won the election in Georgia. I have been clear on that. I have said that President Trump won the election in 2016. I have been clear on that.”

President Joe Biden and the White House have ramped up criticism of Republicans who support Trump in recent weeks, referring to them as “MAGA Republicans.” MAGA stands for make America great again, Trump’s campaign slogan.

“Donald Trump and the MAGA Republicans represent an extremism that threatens the very foundations of our republic,” Biden said during a recent speech.

Biden then claimed that “there is no question that the Republican Party today is dominated, driven, and intimidated by Donald Trump and the MAGA Republicans, and that is a threat to this country.”

The rhetoric has earned pushback.

“President Biden has chosen to divide, demean and disparage his fellow Americans. Why? Simply because they disagree with his policies. That is not leadership,” House Minority Leader Kevin McCarthy (R-Calif.) said.

Jean-Pierre said that Biden has and will continue to call out Republicans who don’t acknowledge what unfolded on Jan. 6, 2021, describing the U.S. Capitol breach as an insurrection incited by Trump.