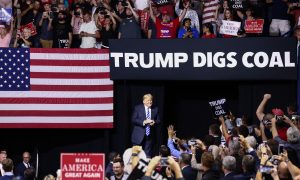 Trump described the meeting, attended by members of Congress who were instrumental in passing the act, and Cabinet members, as being partly “productive discussion” and partly “a little bit of a celebration meeting.”

The discussion of FIRRMA at the White House was to a great degree about responding to the Chinese regime’s predations.

Sen. Marco Rubio (R-Fla.) said: “Mr. President, as you know, we often talk about this, and I’m constantly thanking you for finally standing up to China after far too long of not doing it, as an American government. … Because they seek to replace us in the world—not to be equal to us, to overtake us. And it’s almost too late. But finally, someone is standing up to them.”

Sen. Tom Cotton (R-Fla.) pointed out that China doesn’t need as much as before to steal American technology, as it could now obtain technology by buying small, innovative American companies.

FIRRMA will “allow us to recognize those threats for what they are, and to stop China from buying our most critical technology,” Cotton said.

The act modernizes the Committee on Foreign Investment in the United States (CFIUS) for the first time in 30 years.

The official said FIRRMA has two main purposes. The first is “to deal with some of the significant threats to our national security, from predatory investment policies.”

The second is to help to continue to grow the economy. Restrictions on investment, if too strict, might effectively redirect foreign investment to other countries, damaging American growth and innovation. So, the drafters of FIRRMA sought a careful balance between protecting U.S. national security and minimizing harm to the economy.

“We really came up with something that we think really hits that golden mean between ensuring that we have national security but, at the same time, that open-investment climate,” said the official.

FIRRMA gives CFIUS “two big buckets of transactions” that it didn’t previously have jurisdiction over, the official said.

The first of these buckets involves real estate. The failure of CFIUS to have authority over real-estate deals was exposed in 2006 when a Dubai company bid to operate six U.S. ports. This deal came under intense scrutiny from members of Congress who discovered CFIUS didn’t have the authority to stop the deal, which the Dubai company eventually dropped under pressure.

FIRRMA reach encompasses ports and real estate near sensitive military installations and, in other ways, expands the jurisdiction to review real-estate transactions.

The second bucket involves partial ownership of companies. A foreign investor might have less than a controlling stake in a company but, through a seat on the company’s board, for instance, acquire “insight into critical technologies, the ability to make key decisions or participate in decisions with respect to critical infrastructure, and in some cases, access to Americans’ personally identifiable information,” the official said.

In these cases, CFIUS can now review and, if necessary, deny those investments.