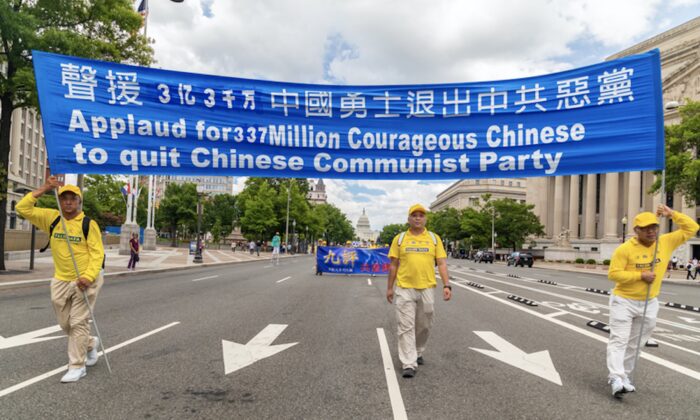 Falun Gong practitioners hold a banner in support of the 330 million Chinese who have withdrawn from the Chinese Communist Party during a parade in Washington on July 18, 2019. (Mark Zou/The Epoch Times)
China Human Rights

Calls are growing stronger for U.S. officials to support China’s largest grassroots movement since the Tiananmen Square protests in 1989.

Tuidang, or “quitting the Party” in Chinese, has been gaining momentum steadily in China over the past 15 years. More than 342 million Chinese within and outside China have joined the movement aimed at an ethical revival, using an alias to formally renounce ties with Chinese Communist Party (CCP) organizations, as well as the Party’s dark history of persecuting its own citizens.

Echoing Chinese citizens’ campaign, people in other parts of the world are now calling on the United States to stand with the Chinese people as they oppose communist values.

According to White House website policies, the administration will have to issue an official response to the petition within 60 days if the number of signatures passes the 100,000 mark. The petition currently has over 5,400 signatures.

The petition stated that the cause would not only help people in China “who have been trampled [on] for decades, but to all nations and people who have been infiltrated, dominated, [and] openly and insidiously tormented by the CCP.”

According to Washington-based think tank Freedom House, as a movement focused on Chinese culture, Tuidang “does not necessarily aim to overthrow the Communist Party, but rather encourages Chinese to imagine a future without it and to renounce support for its violent tendencies.”

In May of 2018, U.S. lawmakers, human rights activists, and dissidents from China convened a panel on Capitol Hill to discuss the Tuidang movement. Rep. Steve King (R-Iowa) drafted a proclamation commending the importance of the movement to increasing spiritual awareness in China.

Although Tuidang by nature is not a political movement and does not provide political solutions, it “helps Chinese people reclaim their God-given conscience,” King said. “The objective of the Tuidang movement, first and foremost, is to cut the spiritual ties of each and every individual to communism so that they can return to their traditional values and freely pursue God.”

“The weakening of CCP from within would be beneficial to the entire world,” King said.

Trevor Loudon, an expert on communism from New Zealand, said at the Capitol Hill event in May: “[T]he Tuidang movement is probably the most important thing that’s being done on this planet right now, because how that goes is going to determine what happens to not just China, but freedom-loving people everywhere,” he said. Loudon is also a commentator for The Epoch Times.

Sen Nieh, vice president of the New York-based Tuidang Center and a professor at the Catholic University of America, applauded the petition, saying that it resounds with universal values that protect fundamental rights, as well as the founding principles of the United States.

He also said he believes it is a good time for the U.S. administration to lend support to “freedom-seeking people around the world.”

“The U.S. has been a strong … superpower in the world not only because of the military power or diplomatic power. It’s the values we treasure—the democracy and traditional values,” he told The Epoch Times in an interview.

In China, people are now quitting the Party at roughly one person per second “around the clock, 24 seven,” Nieh said.

“This shows the people’s choice. They want the civilized Chinese culture and society, not the communist persecution,” he said, calling it “the awakening of the conscience.”

Commentary 3: On the Tyranny of the Chinese Communist Party

According to some estimates, a figure equivalent to half of China’s population has been impacted by political movements initiated by the CCP during its nearly 70-year-long rule.

The country remains rife with human rights abuses. In June, an independent people’s tribunal comprised of a panel of experts and lawyers concluded that China was conducting forced organ harvesting—the practice of extracting organs from prisoners of conscience and selling them for transplant surgery—“on a significant scale.”

Also, U.S. officials recently criticized Beijing for its detention of some 1 million or more Muslim ethnic minorities in the northwestern region of Xinjiang.

A 2019 Freedom House report rated China’s overall freedom with a score of 11 out of 100. The report also gave China a score of negative 1 out of 40 on political rights.

On June 4, the 30th anniversary of Beijing’s crackdown on student protesters in Tiananmen Square, Congressman Mike Gallagher (R-Wisc.) called out the growing aggression of the CCP both at home and abroad, saying that the United States is facing a “Chinese Communist Party problem.” He urged U.S. leaders to “stay true to our values,” which “provides a self-evident contrast to the dystopian future offered by the CCP.”