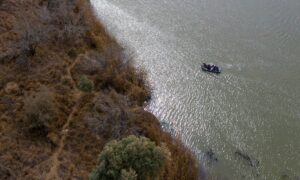 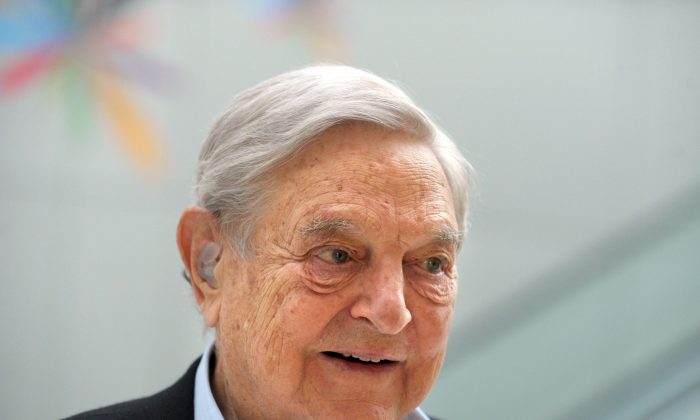 George Soros at the Institute for New Economic Thinking (INET) in Paris on April 9, 2015. (Eric Piermont/AFP/Getty Images)
US

A We the People petition to the White House calls on the United States to list multi-billionaire George Soros as a terrorist, and to seize assets of his organizations and of organizations tied to him.

Soros has been a key financier behind many revolutions around the world, and has also played a leading role in crashing the currencies of countries, including most famously in the United Kingdom.  In the United States, he has helped organize opposition to President Donald Trump.

According to the White House website, “We the People is a platform that empowers the American public… to speak directly to the government and become an agent for change.”

It alleges that “George Soros has willfully and on an ongoing basis attempted to destabilize and otherwise commit acts of sedition against the United States and its citizens,” and states he has applied a model of terrorist tactics similar to those proposed by Marxist radical Saul Alinsky.

It continues, stating that the programs funded by Soros have worked to “facilitate the collapse of the systems and Constitutional government of the United States, and has developed unhealthy and undue influence over the entire Democrat Party and a large portion of the US Federal government.”

It calls on the U.S. Department of Justice to declare Soros, his organizations, and his staff members terrorists; and to seize their wealth and assets under the Civil Asset Forfeiture law.

Soros has been described as a terrorist before. He is mentioned as a key example of a “financial terrorist” in a Chinese military document, “Unrestricted Warfare,” which was penned in 1999 by two then-colonels and has become a foundational document of the Chinese regime’s asymmetrical hybrid warfare programs.

“We believe that before long, ‘financial warfare’ will undoubtedly be an entry in the various types of dictionaries of official military jargon,” the document states, adding that “The main protagonist in this section of the history book will not be a statesman or a military strategist; rather, it will be George Soros.”

“The typical characteristics of terrorism including being transnational, concealed, without rules, and tremendously destructive, have given us reason to call it financial terrorism,” the document states.

After explaining Soros’s methods in detail, it adds, “Judging by this kind of standard, who can say that George Soros is not a financial terrorist?”

The petition’s assertion that Soros aims “to facilitate the collapse of the systems and Constitutional government of the United States” occurs in the context of his long history of financing movements to overturn governments.

He helped finance the October 2000 “Bulldozer Revolution” in Serbia, according to The Los Angeles Times, which reported in Jan. 2001 that Soros “played a key role in the dramatic overthrow last year of President Slobodan Milosevic” through his Soros Foundations Network.

In November 2003, the Globe and Mail reported that the  overthrowing of Georgian President Eduard Shevardnadze “carried the mark of Soros.”  The paper quoted Zaza Gachechiladze, editor-in-chief of The Georgian Messenger, stating “It’s generally accepted public opinion here that Mr. Soros is the person who planned Shevardnadze’s overthrow.”

Soros has also been a key financier in destabilizing Ukraine in its conflict with Russia, according to the Daily Caller.

And according to WND, through Soros’s Open Society he also played a role in the Arab Spring movements, which destabilized several Arab nations. WND reported the Open Society “funded the main opposition voice in Tunisia, Radio Kalima, which championed the riots that led to the ouster of President Zine El Abidine Ben Ali.”

In the United States, Soros funding is tied to many anti-Trump groups, and he is a heavy financier of Democratic candidates.

Daily Mail reported in January 2015 that Soros “donated $33 million to social justice organizations which helped turn events in Ferguson from a local protest into a national flashpoint.”

Fox News reported in March 2016 that Soros, along with other donors, launched a $15 million campaign to get Latinos and immigrants to vote.

In November 2014, Soros’s Open Society Foundations provided a $50 million grant to the American Civil Liberties Union (ACLU), which has been leading many anti-Trump movements. Newsmax reported in March that the ACLU was launching nationwide resistance trainings, and NPR also reported in March that an ACLU lawyer is “at the heart of the legal resistance to the Trump agenda.”

Soros also has a history of launching actions to create financial crisis in targeted countries, then profiting from them.

In 1992 he shorted the British pound, after “wagering $10 billion on a drop in its value,” according to the book, “The Shadow Party,” by New York Times bestselling authors David Horowitz and Richard Poe. The Bank of England tried to keep the British pound afloat by “buying up pounds as fast as Soros could dump them,” but as other investors followed Soros, the bank eventually gave up.

This led to a global financial crisis, and the book notes, “When it was over, millions of hardworking Britons confronted their diminished savings, while Soros counted his gains.” It notes Soros made close to $2 billion from the manufactured crisis.

It adds that in 1993, Soros pulled a similar move that crashed the German mark. He did this with a single letter to the Times of London, stating “I expect the mark to fall against all major currencies.” This triggered panic selling.

Soros did this again in July 1998, after, according to “The Shadow Party,” he told the Financial Times of London “that the Russian government ought to devalue the ruble by 15 to 25 percent.” This again led to panic selling, which sent Russia into a financial depression.

It notes numerous other cases, including just after the terrorist attack on the World Trade Centers on Sept. 11, 2001. In an attempt to prevent the attack from causing a financial crisis in the United States, investors and major companies joined together to invest, and the Federal Reserve released cash into the economy so as to not let the markets falter.

Soros had other plans, however. Rather than help rally the market, Soros bet against it. Following the attacks, Soros stated on Sept. 19, 2001, that “I don’t think you can run markets on patriotic principles,” according to “The Shadow Party,” and for many who followed Soros, “that was all they needed to know.”