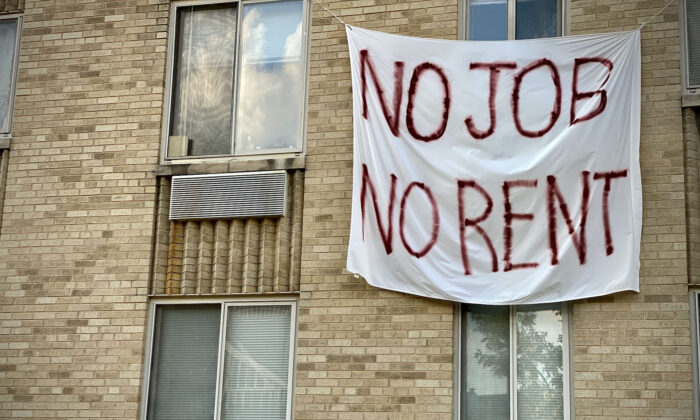 A banner against renters eviction reading "no job, no rent" is displayed on a controlled rent building in Washington, D.C. on Aug. 9, 2020. (Eric Baradat/AFP via Getty Images)
Executive Branch

The White House on Thursday extended the federal pause of evictions that was implemented during the COVID-19 pandemic by one month, until the end of July.

Supporters of the moratorium have said that it is needed to allow struggling people to pay their rent during the pandemic. Opponents, however, have said that the mandate is unconstitutional and places undue pressure on landlords and property owners.

The federal ban on evictions was implemented last September and was extended several more times. But the Centers for Disease Control and Prevention (CDC), which implemented the rule, said on Thursday that it would extend it to July 31 and added “this is intended to be the final extension of the moratorium.”

“The COVID-19 pandemic has presented a historic threat to the nation’s public health,” the agency also said. “Keeping people in their homes and out of crowded or congregate settings—like homeless shelters—by preventing evictions is a key step in helping to stop the spread of COVID-19.”

Their letter warned that if the moratorium is rescinded, some “6 million renter households are behind on their rent and at risk of eviction.”

“Evictions take lives and push households deeper into poverty, impacting everything from health outcomes to educational attainment,” they also wrote.

Meanwhile, the moratorium had faced pushback from property owners as well as the National Association of Realtors, which filed an emergency lawsuit with the Supreme Court earlier this month. The case is currently pending.

“Landlords have been losing over $13 billion every month under the moratorium, and the total effect of the CDC’s overreach may reach up to $200 billion if it remains in effect for a year,” their emergency petition stated.

The federal government sent out about $46 billion in congressionally approved funds for renters and landlords over the past four months.

However, very little of that money has reached landlords and tenants, according to the National Association of Home Builders, which blamed bureaucratic chaos on behalf of the federal government.

“This is stuck in some sort of 50-state, maybe 1,000-county, morass,” Jerry Howard, CEO of the National Association of Home Builders, told Politico in May. “You have private citizens who are still obligated to pay their mortgages and the operations of these apartment buildings, and they’re not even able to break even.”