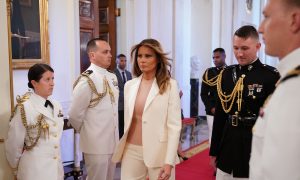 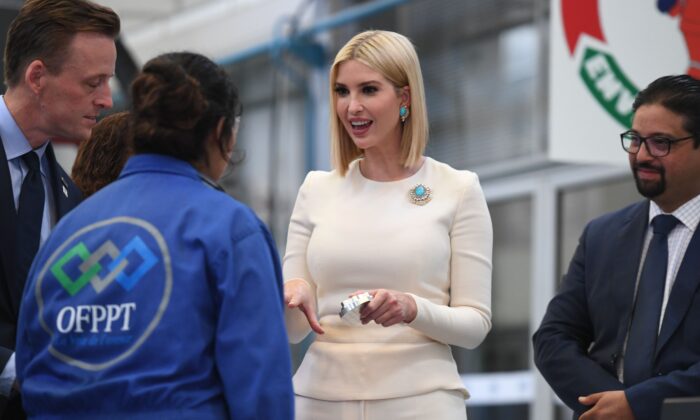 Ivanka Trump (C), daughter and advisor of US President Donald Trump, chats with a student as she tours ISMALA, a Moroccan institute specializing in aeronautic industries and civil aviation logistics, in the port city of Casablanca on November 8, 2019. (FADEL SENNA/AFP via Getty Images)
Trump Administration

WASHINGTON—President Donald Trump’s daughter and senior adviser Ivanka Trump announced on Nov. 18 a round of grants worth more than $11 million to help women access economic opportunities in developing countries.

The grants are part of the Women’s Global Development and Prosperity (W-GDP) Initiative, a White House program established in February by President Trump.

This round of grants is part of the W-GDP’s larger pool of $100 million and growing.

President Trump included an additional $100 million for the program in his 2020 budget. The W-GDP’s goal is to reach 50 million women in the developing world by 2025, through “U.S. government activities, private-public partnerships, and a new, innovative fund housed and managed by USAID.”

The recent round of grants will help give women in more than a dozen countries—including Rwanda, Senegal, and Bangladesh—access to the internet and mobile phones. That will help them connect with training, employment, and financial services.

“Women in the digital economy is absolutely critical,” Ivanka Trump said at a W-GDP event she co-hosted with the United States Agency for International Development (USAID) on Nov. 18.

“We know that today in developing countries, there’s a tremendous digital gender gap that exists,” she said, adding that 1.7 billion women in low- and middle-income countries still don’t have a mobile connection. They are also 40 percent less likely to use the internet than men.

The initiative has three key objectives: to help women prosper in the workforce, to support them as entrepreneurs, and to advance economic equality under the law.

In July, the W-GDP announced its first round of grants worth $27 million for 14 projects that will benefit 100,000 women in 22 countries.

The objective of W-GDP is to help women reach their full economic potential and “unleash the most underdeveloped resource” in the world, Ivanka Trump said. She added that the program has encouraged other countries to also help improve women’s access to capital and business opportunities.