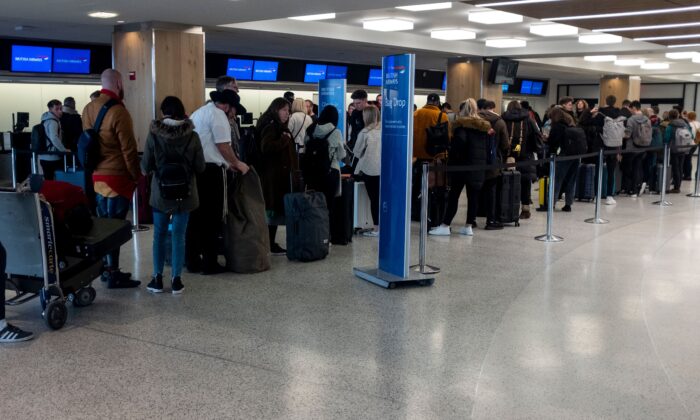 People queue in the departure hall of Terminal 7 at JFK airport in New York City on March 15, 2020. (Johannes Eisele/AFP via Getty Images)
By Zachary Stieber

People who leave or have left the New York City metro area should self-isolate for two weeks to avoid infecting family and friends with the CCP virus, White House officials reiterated late Thursday.

New York has the highest number of cases in the country and continues reporting thousands of new patients each day. Five of the top 10 counties in terms of cases are in the New York City metro area, Vice President Mike Pence, head of the White House Coronavirus Task Force, told reporters in Washington.

“Any resident of the greater New York City area who has traveled elsewhere in the United States: please check your temperature, mind your health, and self-isolate for 14 days,” Pence said.

“We don’t want anyone—and no one would want to—inadvertently carry the coronavirus to a community or to a family member.”

Officials on the task force, including Dr. Deborah Birx, urged on Tuesday people who leave the New York metro area to self-quarantine for 14 days from the time they left. But New York officials dismissed the guidance twice in recent days.

Birx, the task force coordinator, sounded a warning while trying to highlight why the group was asking for the self-isolation.

“It’s very important to me personally because my grandmother, for 88 years, lived with the fact that she was the one, at age 11, who brought home flu to her mother, named Leah—for which I am named—when her mother had just delivered. And her mother succumbed to the great 1918 flu. She never forgot that she was the child that was in school that innocently brought that flu home,” she told reporters on Wednesday.

People who bring the virus with them and infect someone with a preexisting condition will have to live with that knowledge for the rest of their lives, Birx said.

“This is not a theoretic; this is a reality. You can see the number of deaths that are occurring. We all have a role in preventing them,” she added.

No domestic travel restrictions are currently in place but some states have implemented mandatory quarantines for people flying in from other states, including Florida for New Yorkers, Hawaii for people from all other states and countries, and Texas for Louisiana residents.

“I would hope that what Governor Abbott is doing in Texas will reinforce my message here in Louisiana about the need to stay at home,” he said. “Because that, principally, is what quarantining is.”

Many governors have signed stay-at-home orders requiring residents to remain in their residences except for so-called essential trips for food, medicine, or essential work. None appear to have placed restrictions on residents leaving their states.

Responding to a reporter noting that nothing appears to prevent someone from an area with numerous cases traveling to other areas, Birx on Thursday called on people to be “highly responsible.”

“I think the American people can understand that: they can understand where the virus is and where it isn’t and make sure they’re taking appropriate precautions as they’re moving in and out of spaces,” she said.