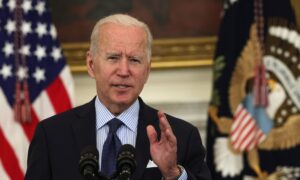 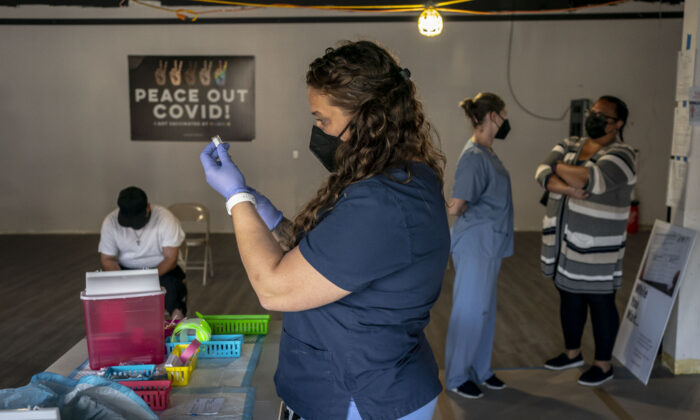 White House officials on Thursday brushed off questions about President Joe Biden’s July 4 vaccine goal, which appears to be in jeopardy due to the current vaccination rate.

Asked about the goal during a virtual briefing on Thursday, White House coronavirus coordinator Jeff Zients did not say whether the goal could still be met.

“We’ve made tremendous progress. Today, more than 175 million Americans have gotten at least one shot: as I said, 87 percent of seniors, 74 percent of people over the age of 40. And we’re now nearly 2 in 3 adult Americans,  hundreds of thousands of people are continuing to get their first shot each day,” he said.

“And we are going to get to 70 percent. And we’re going to continue across the summer months to push beyond 70 percent,” he added.

Biden earlier this year said he wanted 7 out of 10 adults to get at least one COVID-19 jab by Independence Day.

But the rate of vaccination has fallen sharply, dropping from over 4 million to around 1 million on an average day. Only 184,847 shots were administered on Memorial Day, and several other recent days have seen a figure well under 1 million.

Biden also wanted 160 million Americans to be fully vaccinated by July 4. Fully vaccinated refers to a person getting both doses of the Pfizer or Moderna shots or the single-shot Johnson & Johnson, and then two weeks elapsing. Just 147.7 million people have been fully vaccinated as of June 17.

White House press secretary Jen Psaki told reporters on Sunday, after being asked whether she was concerned the goals wouldn’t be reached, that while the government can provide incentives to get a vaccine, “it is ultimately up to individuals to do that.”

“What you’ve seen is that a number of states have met and surpassed that goal, right? Many have not yet. But we’ve started—kicked off this one-month campaign to do everything we can to reach it. And we’ll see where we get. We’ve got some time,” she said.

Over a dozen states have vaccinated at least 70 percent of adults but in others, under 50 percent have received a shot.

Federal officials have continued pushing virtually everyone who can to get a vaccine despite a growing body of research indicating that natural immunity is conferred from recovery from COVID-19, the disease caused by the CCP (Chinese Communist Party) virus.

Dr. Rochelle Walensky, the head of the Centers for Disease Control and Prevention, told reporters on Thursday that “getting vaccinated is our way out of this pandemic.”

“Opening up is not synonymous with stopping the push to vaccinate people. So, I think people should not misinterpret that because a city or a state is opening up, that they’re done. No, they’re not,” added Dr. Anthony Fauci, the longtime director of the National Institute of Allergy and Infectious Diseases.

“We’re going to continue to push vaccination beyond the Fourth of July, into the summer, so to get as many people vaccinated as we possibly can, whether you’re open as a state or a city, or not. That’s the goal.”