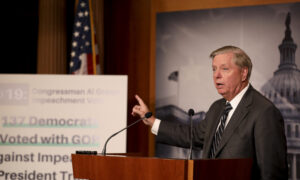 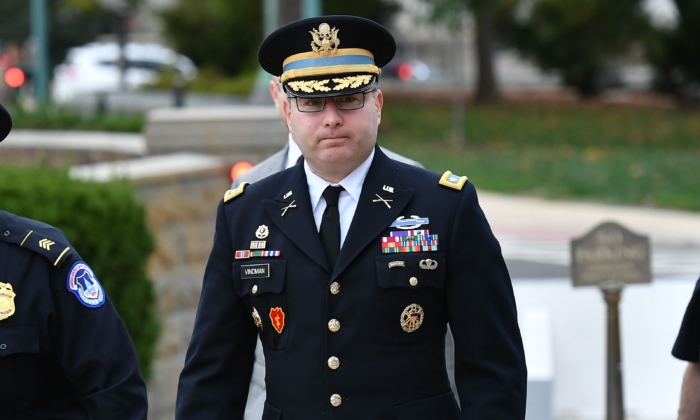 National Security Council Director for European Affairs Alexander Vindman arrives for a closed-door deposition at the US Capitol in Washington, on Oct. 29, 2019. (Mandel Ngan/AFP via Getty Images)
Politics

A senior National Security Council official who listened in on President Donald Trump’s call with the leader of Ukraine testified in the impeachment inquiry on Oct. 29, telling lawmakers that he twice raised concerns about the conversation with the NSC’s lead counsel.

During a congratulatory call with Ukrainian President Volodymyr Zelensky on July 25, Trump asked about potential investigations into former Vice President Joe Biden and his son, Hunter Biden. Trump’s request is at the center of the Democrat-run impeachment investigation, which is examining whether Trump’s request amounted to pressuring a foreign leader to investigate a political opponent.

“I was concerned by the call. I did not think it was proper to demand that a foreign government investigate a U.S. citizen, and I was worried about the implications for the U.S. government’s support of Ukraine,” Vindman told lawmakers on Oct. 29, according to a copy of his prepared statement.

“I realized that if Ukraine pursued an investigation into the Bidens and Burisma, it would likely be interpreted as a partisan play which would undoubtedly result in Ukraine losing the bipartisan support it has thus far maintained. This would all undermine U.S. national security. Following the call, I again reported my concerns to NSC’s lead counsel.”

Vindman is the first official who had listened to the July 25 call to testify in the impeachment inquiry. Secretary of State Mike Pompeo was also on the call. Vindman said staffers from the NSC and the vice president’s office were also listening in.

The Democrats are also investigating whether military aid to Ukraine, which was temporarily on hold at the time of the July 25 call, was used to pressure Ukraine. All evidence to date shows that Ukrainian officials were unaware that the aid was on hold when Trump spoke to Zelensky. A plain reading of the July 25 call transcript offers no direct evidence of pressure by Trump. Zelensky has twice confirmed that he didn’t feel pressured.

President Donald Trump criticized the impeachment inquiry on Twitter on Oct. 29, calling it a “witch hunt.”

“How many more Never Trumpers will be allowed to testify about a perfectly appropriate phone call when all anyone has to do is READ THE TRANSCRIPT! I knew people were listening in on the call (why would I say something inappropriate?), which was fine with me, but why so many?” the president wrote, referring to the official transcript (pdf) of his call with Zelensky.

Vindman’s statement came one day after House Speaker Nancy Pelosi (D-Calif.) said the House will vote to formally authorize the impeachment inquiry. Pelosi made the announcement after weeks of criticism from Republicans and Trump, who noted that the Democrats have abandoned the precedent established in the two prior impeachment inquiries. The vote is expected to be held on Oct. 31.

Vindman said he heard U.S. Ambassador to the European Union Gordon Sondland emphasize during a debriefing on July 10 “the importance that Ukraine delivers the investigations into the 2016 election, the Bidens, and Burisma,” the gas giant that paid the younger Biden to serve on its board of directors.

Joe Biden bragged in early 2018 about forcing the firing of the top Ukrainian prosecutor by threatening to withhold $1 billion in U.S. loan guarantees. At the time that Biden exerted the pressure, the prosecutor, Viktor Shokin, was investigating Burisma. Shokin later said in a sworn statement that he was ousted under pressure from Biden because he refused to drop the Burisma investigation.

Vindman says he told Sondland that “his statements were inappropriate, that the request to investigate Biden and his son had nothing to do with national security, and that such investigations were not something the NSC was going to get involved in or push.”

That account differs from Sondland’s, who told lawmakers that no one from the NSC “ever expressed any concerns.” He also testified that he didn’t realize there was any connection between Biden and Burisma.

Vindland said he isn’t the whistleblower, the still-anonymous government official who filed the complaint that triggered the impeachment inquiry. The whistleblower alleged that Trump’s request may have constituted a campaign finance violation. The Justice Department reviewed the complaint and determined no further action was necessary.

Democrats deny that the Oct. 31 vote to formalize the impeachment inquiry came as a result of pressure from Republicans. Pelosi dismissed the Republican argument that impeachment can’t begin without formal approval from the House and brushed off their complaints about the secretive process.