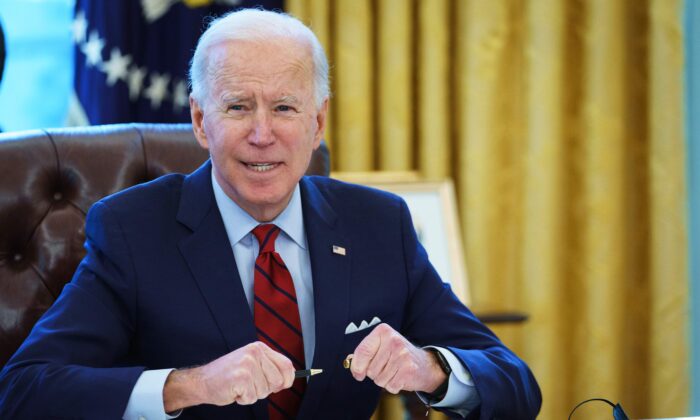 “The needs of the American people are urgent from putting food on the table, to getting vaccines out the door to reopening schools. Those aren’t partisan issues. We are engaging with a range of voices—that’s democracy in action—we aren’t looking to split a package in two,” Jen Psaki, Biden’s press secretary, said in a tweet.

“The needs of the American people aren’t partial; we can’t do this piecemeal,” added Brian Deese, a top White House economic adviser.

A number of Republicans have expressed shock over the cost of the proposed package. It’s more than double a package Congress passed and President Donald Trump signed late last year.

Sen. Mitt Romney (R-Utah) on “Fox News Sunday” called the amount “pretty shocking.” On CNN’s “State of the Union,” he added: “I think people recognize it’s important that we don’t borrow hundreds of billions, actually trillions of dollars from the Chinese for things that may not be absolutely necessary.”

Republicans have questioned why the proposal includes items not directly related to the COVID-19 pandemic, such as a federal minimum wage hike.

Some still oppose stimulus checks to most Americans, arguing that form of relief should be more targeted.

Senate Democrats said Wednesday they could push through a bill under a procedure that wouldn’t require a single GOP vote, triggering pushback from the other side of the aisle.

“We are ready to work with Democrats on any necessary legislation, COVID-19 relief legislation that would achieve that objective,” Sen. John Thune (R-S.D.) said, referring to defeating the pandemic and getting Americans vaccinated.

“It would be very disappointing, madam president, if Democrats decided to shove a partisan bill through Congress without even attempting to work with Republicans,” he said on the Senate floor in Washington.

House Speaker Nancy Pelosi (D-Calif.) joined with Senate Democrat leaders in pushing for the use of a budget reconciliation process in avoiding having to rely on Republican support.