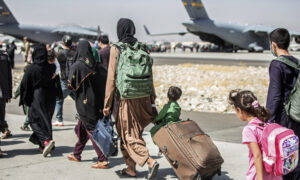 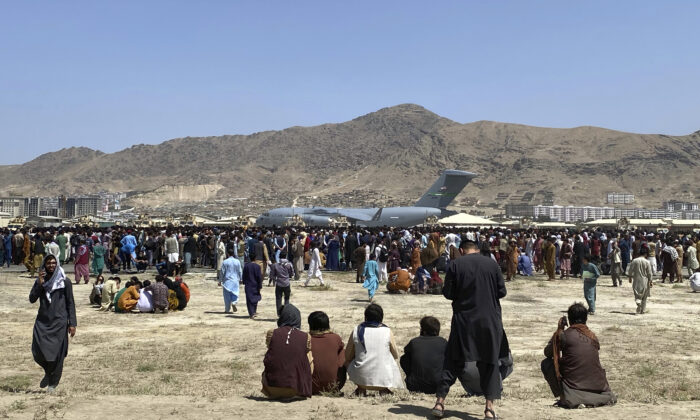 Hundreds of people gather near a U.S. Air Force C-17 transport plane at the perimeter of the international airport in Kabul, Afghanistan, on Aug. 16, 2021. (Shekib Rahmani/AP Photo)
Executive Branch

White House: Not Every Afghan Who Wants to Get out Will Be Able To

Amid the chaotic U.S.-led evacuation in Afghanistan, White House press secretary Jen Psaki acknowledged that not every Afghan who wants to leave the country will be able to.

“It is not going to be possible for every single Afghan, millions potentially, who want to leave Afghanistan to be evacuated,” Psaki said in response to a question fielded by a reporter at the White House on Thursday, coming after President Joe Biden delivered remarks on the terrorist attack at the Kabul airport that left numerous people dead.

“At the same time,” she added, “I think you also heard the president make clear that there is not a deadline.”

On Thursday, Biden said the United States is committed to the evacuation and also vowed to hunt down members of the ISIS-K terrorist group who were blamed for the Kabul airport terrorist attack. The president spoke hours after several blasts killed at least 13 American troops and even more civilians, the worst day of casualties for American forces in Afghanistan in a decade.

“There is not an end to our commitment to getting American citizens out who don’t want—who are not ready to leave and to getting partners out and those who have served alongside the United States over the last twenty years out,” Psaki said. “We will complete our mission. And we will continue, after our troops have withdrawn, to find means by which we defined any American who wishes to get out of Afghanistan. We will find them and we will get them out,” she added.

Biden said he had ordered U.S. military commanders to develop operational plans to strike ISIS-K assets, leadership, and facilities. “We will find ways of our choosing, without large military operations, to get them,” he said.

He appeared to be fighting back tears and his voice cracked with emotion as he talked about the American “heroes” who died. He ordered flags at the White House and public buildings around the country to be lowered to half staff.

Biden defended his handling of his most serious foreign policy crisis, saying ultimately it is his responsibility, while assigning some blame to his predecessor, Donald Trump, for the 2020 agreement Trump negotiated with the Taliban. However, Biden reneged on key provisions in Trump’s deal, including pushing back the withdrawal date from May 1 until the end of August to coincide with the 20th anniversary of the Sept. 11, 2001, attacks that launched the U.S. into the war.