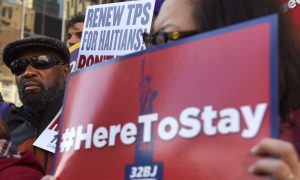 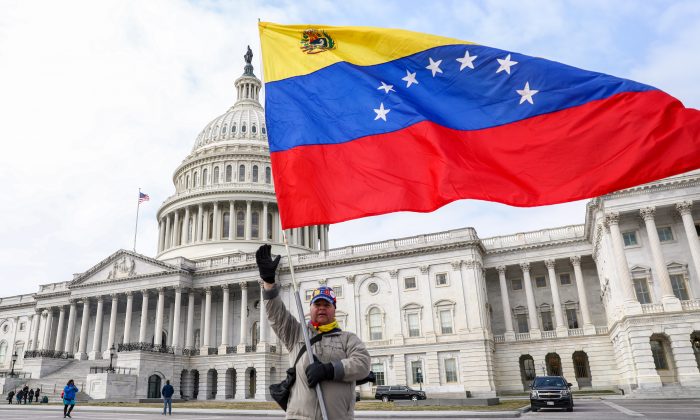 A man waves the Venezuelan flag in front of the Capitol building in Washington on March 7, 2019. (Charlotte Cuthbertson/The Epoch Times)
Trump Administration

White House Mulls Protection for Venezuelans in the US, but Shy About Anything Hard to Undo

WASHINGTON—As the United States tightens the economic screws on Venezuelan dictator Nicolás Maduro, the administration is figuring out what to do with the Venezuelan nonimmigrants in this country.

Lawmakers, the majority Democrats, are pushing for Venezuelans to be granted Temporary Protected Status (TPS), a designation that would protect those already in the United States from deportation and provide work authorization.

The status is granted to foreign nationals by the secretary of Homeland Security for such issues as an ongoing armed conflict (such as civil war), an environmental disaster (such as an earthquake or hurricane), an epidemic, or other extraordinary and temporary conditions.

About 270,000 Venezuelans currently in the United States would potentially be eligible for the status, including 123,000 who are illegally present, according to the Department of Homeland Security (DHS) Office of Immigration Statistics.

But the administration and most Republicans are reluctant to back the legislation, with many saying history has shown there’s nothing temporary about the status. President Donald Trump has tried to end TPS for six countries in the past year or so, but has been blocked by a federal judge each time.

“There are few things more permanent, though, than Temporary Protected Status,” Sen. Tom Cotton (R-Ark.) said at an event hosted by the Center for Immigration Studies on July 31.

“We have foreign nationals living in our country today who got TPS protection 10 or 20 years ago while there was a civil war going on in their country, and the war has been settled for over 10 years.”

Cotton said the current situation in Venezuela under Maduro is exactly the reason the program was created—for those living in the United States legally, who are not eligible for visa renewal, but can’t return to their home country safely.

“I think most Americans recognize that’s a sensible, sound policy, in principle,” Cotton said. But, he said, it doesn’t work if it’s impossible to rescind.

“The bureaucracies of both parties for decades have been unwilling to rescind TPS status when it should be rescinded,” he said. “Now that President Trump finally has done so, you have left-wing judges basically practicing a form of resistance law that is not letting the president withdraw TPS status, which is his prerogative under federal law. So I think it’s unwise for us to extend more TPS protection to other countries when we can’t even withdraw it from countries who have it now.”

In January, the Department of Homeland Security announced an end to TPS for about 200,000 nonimmigrant Salvadorans.

Then-Secretary of Homeland Security Kirstjen Nielsen determined that the original conditions for granting TPS to Salvadorans in 2001—the aftermath of a series of earthquakes that killed 1,000 people and destroyed hundreds of thousands of homes—no longer exist. The move was met with court action and TPS remains active for Salvadorans.

In 2018, the administration tried to rescind TPS designations for five other countries—Honduras, Haiti, Nicaragua, Nepal, and Sudan—but was blocked by judges each time.

TPS will continue for those countries while the cases make their way through the appeals process. Beyond that, Democrats have introduced legislation that would give amnesty and a pathway to citizenship for all current TPS holders—about 417,000 foreign nationals currently have TPS.

The House passed a bill supporting TPS for Venezuelans on July 25, but it fell flat on the Senate floor on July 30.

“How can you say you care for the people of Venezuela, yet when it comes to those in the United States, force them to return to this circumstance?” Sen. Dick Durbin (D-Ill.) said at the time.

Sen. Bob Menendez (D-N.J.) called it an “unconscionable moral failing” for the Senate not to approve the legislation.

Menendez introduced the Senate’s version of the bill in February, but it hasn’t gone anywhere.

The administration has said it would veto the current bills, should they make it to the president’s desk.

Cotton said he’d be happy to take another look at the legislation if the Democrats were to include a measure that allows a president, via the Department of Homeland Security, to rescind TPS without court interference.

Sen. Marco Rubio (R-Fla.), who co-sponsored the Senate bill, said he’s working with the administration to find a solution.

“We’ve made progress,” Rubio said in a Twitter video on July 31. “We have a few more hurdles to climb and to clear, but I think, hopefully, fingers crossed, we’re going to have some good news soon from the administration on this.”

Venezuela’s ambassador to the United States, Carlos Vecchio, said he is lobbying for U.S.-based Venezuelans to be protected from deportation.

A spokesperson from Homeland Security said a TPS designation for Venezuelans isn’t appropriate at this time.

“Furthermore, the Venezuela crisis is already being addressed regionally, in part, by the UNHCR’s Regional Refugee and Migrant Response Plan.”

Although the 270,000 nonimmigrant Venezuelans in the United States don’t have an officially protected status yet, the near-impossibility for Immigration and Customs Enforcement (ICE) to deport them gives them something of a safety net.

“ICE reports that its ability to remove Venezuelan nationals has been ‘severely impacted’ by current conditions in Venezuela,” the Homeland Security spokesperson said. “All commercial flights to Venezuela from the United States—which ICE relies on for removals—have been suspended due to security concerns and financial issues.”

Another solution being considered is the little-used Deferred Enforced Departure. The designation is made at the president’s discretion, and although it’s not a specific immigration status, individuals are not subject to removal, usually for a designated period of time. Work authorization may also be given.

Rubio’s office confirmed on Aug. 6 that Deferred Enforced Departure is another option on the table for the administration.

Currently, only Liberians have such status, which was designated in 2007 by President George W. Bush. It has currently been extended to March 30, 2020.