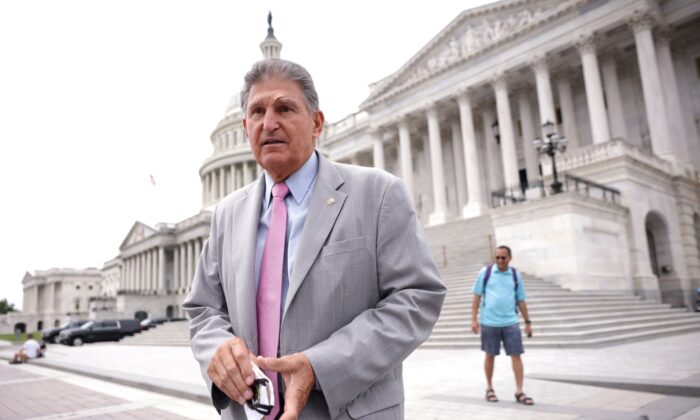 White House: Manchin Went Back on His Word by Not Voting on Biden Spending Bill

The White House said that Sen. Joe Manchin (D-W.Va.) went back on his word when he announced Sunday that he will not support President Joe Biden’s mammoth “Build Back Better” spending package, likely imperiling the measure.

“Senator Manchin’s comments this morning on FOX are at odds with his discussions this week with the President, with White House staff, and with his own public utterances,” White House press secretary Jen Psaki said in a statement on Sunday after Manchin earlier told Fox News that he won’t vote in favor of the legislation.

In the 50-50 Senate, Manchin’s vote is crucial. Democrats had sought to pass the $1.9 trillion spending package via budget reconciliation, coming days after the House passed a version of the legislation.

Citing high inflation, rising numbers of COVID-19 cases being reported, and the country’s staggering $27 trillion national deficit, Manchin said that if he voted in favor of the bill, it would not be “genuine as far as my constituents in West Virginia.”

Manchin further said he believes the measure will cost far more than what the Congressional Budget Office and legislative caucuses have calculated. The senator argued that the bill uses legislative tricks to make it seem like it would cost less than what it actually does.

“What we need to do is get our financial house in order but be able to pay for what we do and do what we pay for,” Manchin said in the Fox News appearance.

But Psaki, in a lengthy statement, claimed Manchin—who for months opposed a larger version of the bill—went back on his word in private discussions with Biden and other White House officials.

“If his comments on Fox and written statement indicate an end to that effort, they represent a sudden and inexplicable reversal in his position,” Psaki said, “and a breach of his commitments to the President and the Senator’s colleagues in the House and Senate.”

“Senator Manchin pledged repeatedly to negotiate on finalizing that framework ‘in good faith,’” Psaki said, adding that he met with Biden at the White House about five days ago and put forth a “written outline for a Build Back Better bill” that covered “many of the same priorities” as Biden’s proposal.

Other than Psaki, left-leaning Democrats in Congress sharply criticized Manchin on Sunday.

Rep. Ilhan Omar (D-Minn.), a member of the leftist “Squad” in the House, tweeted that “Manchin’s excuse is [expletive],” and that “the people of West Virginia would directly benefit from childcare, pre-Medicare expansion, and long term care, just like Minnesotans.”

The White House will continue to apply pressure on Manchin to see whether he will reverse his position, Psaki said.

Manchin’s office did not immediately respond to a request for comment.