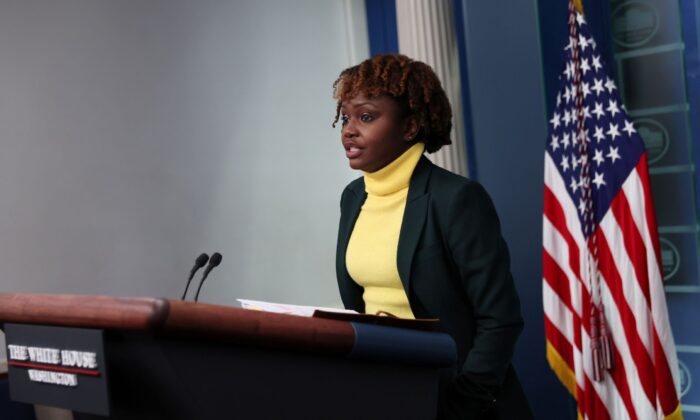 Speaking to reporters, Jean-Pierre said Wednesday that “nothing has changed on how we see the stock market,” which is “not something we keep an eye on every day, so I’m not gonna comment on that from here.”

The Nasdaq Composite dropped nearly 5 percent while the Dow Jones plunged 4 percent on Wednesday. On Thursday morning, the Dow Jones dropped more than 440 points during the morning session.

Earlier in 2022, former White House press secretary Jen Psaki said that President Joe Biden “does not look at the stock market as a means by which to judge the economy.”

The stock market plunge was, in part, triggered by shares of Target, Walmart, and other retailers seeing significant losses in recent days. For example, Target lost about 25 percent of its value after it reported earnings that fell short of analysts’ forecast, namely due to shipping costs that have been exacerbated by high fuel prices and inflation.

Rising interest rates, high inflation, the war in Ukraine, and a slowdown in China’s economy have caused investors to reconsider the prices they’re willing to pay for a wide range of stocks, from high-flying tech companies to traditional automakers.

The last bear market happened just two years ago, but this would still be a first for those investors that got their start trading on their phones during the pandemic. For years, thanks in large part to extraordinary actions by the Federal Reserve, stocks often seemed to go in only one direction: up. Now, the familiar rallying cry to “buy the dip” after every market wobble is giving way to fear that the dip is turning into a crater.

The Federal Reserve is trying to temper the impact of the highest inflation in 40 years by raising interest rates. Many other central banks are on a similar track. But the Bank of Japan has stuck to its low-interest rate policy and the gap between those benchmark rates of the world’s largest and third-largest economies has pushed the dollar’s value up against the Japanese yen.

Raising interest rates tends to create higher rates on both business and consumer loans, which slows down the economy. Some current and former CEOs have expressed concerns that the inflation combined with high-interest rates may trigger a recession in the coming months.