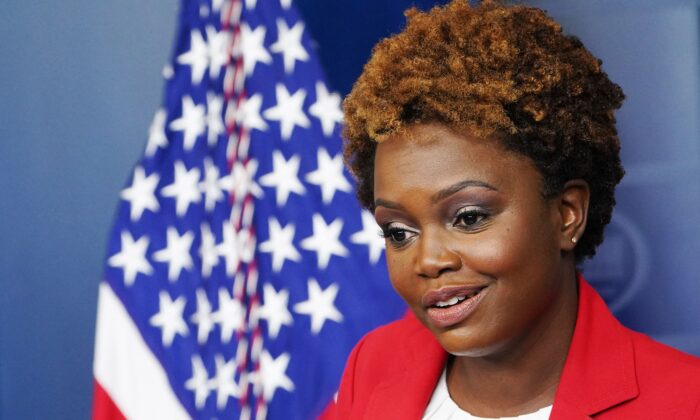 White House deputy press secretary Karine Jean-Pierre speaks during the daily briefing in the Brady Briefing Room of the White House in Washington on Nov. 4, 2021. (Mandel Ngan/AFP via Getty Images)
By Zachary Stieber

Illegal immigrants who were separated from family members by U.S. border agents could get money from the government in a potential lawsuit settlement, the White House said Thursday.

“If it saves taxpayer dollars and puts the disastrous history of the previous administration’s use of zero tolerance and family separation behind us, the president is perfectly comfortable with the Department of Justice settling with the individuals and families who are currently in litigation with the U.S. government,” she said during a briefing in Washington.

Biden, speaking on Nov. 3, told a reporter that reports his administration was mulling such payments were “garbage” and “it’s not true.”

“Four hundred and fifty thousand dollars per person. Is that what you’re saying?” Biden asked. “That’s not going to happen.”

That drew a response from the American Civil Liberties Union, whose lawyers are working on the case in question.

“President Biden may not have been fully briefed about the actions of his very own Justice Department as it carefully deliberated and considered the crimes committed against thousands of families separated from their children as an intentional governmental policy,” Anthony Romero, the group’s executive director, said in a statement.

Jean-Pierre said Biden was merely reacting to the reported figure of $450,000 per person.

“What he was reacting to was the dollar figure that was mentioned,” she said, adding that the Department of Justice “made clear to the plaintiffs that the reported figures are higher than anywhere that a settlement can land.”

She also said that the process of separating illegal immigrant family members was “cruel, inhuman, immoral” and blamed the Trump administration for carrying out the separations.

Reports indicated that the Biden administration was considering payments to the plaintiffs, who have filed multiple lawsuits after the separations. The total payout was said to potentially reach $1 billion, or even exceed that figure.

Many Republican members of Congress had condemned the potential payouts, which the Federation for American Immigration Reform noted were higher than the amounts paid to survivors of U.S. troops who die on active duty and individuals wrongly imprisoned.

Romero told news outlets that Biden’s comments did appear to have an impact.

“The president’s comments and congressional pushback do appear to have affected settlement negotiations, which were admittedly in flux,” he said.

The Department of Justice, he added, “communicated on Wednesday evening that the settlement numbers for separated families were higher than where the settlement could land” and that “parties continue to negotiate.”