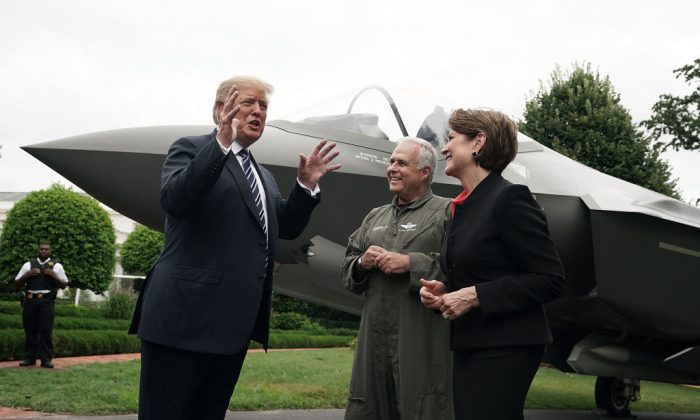 President Donald Trump (L) talks to Chairman, President and CEO of Lockheed Martin Marillyn Hewson (R) and Director and Chief Test Pilot Alan Norman (2nd L) in front of an F-35 fighter jet during the 2018 Made in America Product Showcase at the White House in Washington on July 23. (Alex Wong/Getty Images)
Trump Administration

White House Highlights ‘Made in America’

Among the American products displayed were snowboards from Colorado, cowboy boots from Texas, an F-150 truck made by Ford Motor Co. in Michigan, and baseball bats from Pennsylvania. The White House hosted a similar exhibition last year as well.

President Donald Trump started his speech by praising American-made goods, calling them the greatest in the world, “made with American heart, American sweat, and American pride.”

“I remember when I was growing up, I’d see ‘Made in America’ all over the place,” he said. “We’re starting that again, and it’s happening again.”

Trump touted his economic policies, saying American manufacturing is coming back bigger and stronger after many years of decline.

“What was happening was horrible. I used to talk about it for 20 years in the private sector,” Trump said, criticizing past government policies on trade.

During his campaign for the presidency, Trump made advancing American manufacturing a foundation of his economic policy. As a result of his pro-growth reforms like tax cuts and deregulation, optimism among manufacturers in the United States has hit an all-time record.

A recent survey from the National Association of Manufacturers (NAM) found that more than 95 percent of manufacturers have a positive view about their business outlook. That’s the highest rate recorded since the survey was first conducted in 1997. Manufacturers also added nearly 344,000 jobs since Trump took office.

As a result of tax reform, more than $300 billion in foreign profits were brought back to the United States in the first quarter of 2018, according to the White House.

Trump defended his trade policies during remarks, saying that the United States would be winning again.

“We’re going to win so much. You’ll get tired of winning,” he said.

Trump said his administration may have to impose tariffs on millions of European cars if they cannot reach a deal. “The European Union has been very tough on the United States, but they’re coming in to see me on Wednesday, and we’ll see if we can work something out,” he said.

Trump said car manufacturers and steel producers are coming back and restarting production in the United States.

For globalists, “it is OK to close a car factory or a car plant in Michigan,” said Trump. “And it’s OK to move that plant to Mexico and hire different workers and fire everybody in Michigan. But it’s not OK for me. To me it’s a very bad thing and that’s stopping.”

Optimism within the small-business world has also soared to the highest levels in recent months as a result of tax cuts and strong economic growth. A survey conducted by the National Federation of Independent Business (NFIB) shows hiring and capital spending are the strongest in decades as owners feel it is a good time to expand their firms. In recent months, small manufacturing firms have reported higher gain in sales as well, according to the NFIB survey.