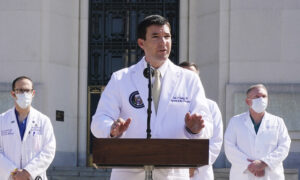 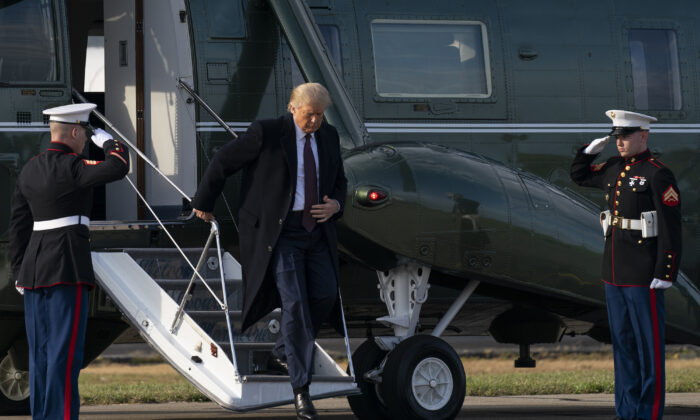 President Donald Trump steps off of Marine One in Morristown, N.J., after attending a fundraiser at Trump National Golf Club in Bedminster, N.J., on Oct. 1. 2020. (Evan Vucci/AP Photo)
AMERICA

Officials said the White House has provided New Jersey health authorities with a list of at least 206 people who attended President Donald Trump’s fundraising events last Thursday in Bedminster, N.J., hours before the president announced he and the first lady tested positive for COVID-19, the illness caused by the CCP (Chinese Communist Party) virus.

State health officials said they were notified that federal authorities are conducting their own separate contact tracing process.

Guidance on contact tracing from the Centers for Disease Control and Prevention (CDC) recommends notifying people who may have been exposed to COVID-19 and urges people who have come into close contact with anyone confirmed to have been infected with the virus to self-isolate.

Health officials said they have reached out to all of the individuals who attended the events “to make them aware of possible exposure and recommend that they self-monitor for symptoms and quarantine if they were in close contact with the president and his staff.” They added that “those who are concerned that they were in close contact should quarantine for 14 days.”

State and county health officials recommended attendees who want to get tested for the virus wait at least 5 to 7 days after Thursday.

“While the risk is low, a negative test earlier than that time cannot definitively rule out that COVID-19 will not develop,” they said in the joint statement.

Somerset County health officials are also interviewing staff members at the golf club, most of whom live in the county, to assess how much contact each had with the president and his staff and “providing public health recommendations accordingly.”

The president announced on Friday that he and the first lady tested positive for the virus early that day. Trump was later taken to Walter Reed National Military Medical Center in Bethesda, Md., with White House physician Dr. Sean P. Conley on Sunday providing an update on president’s condition, saying he “has continued to improve.”

The first lady has been convalescing at home, with her chief of staff announcing on Sunday that her symptoms have not worsened.