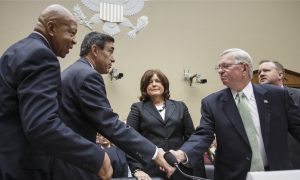 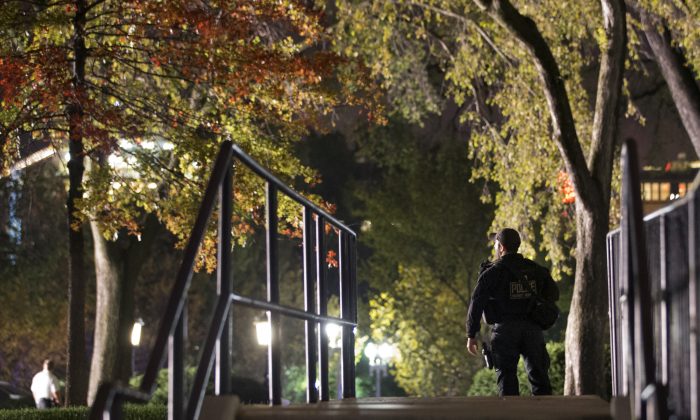 Dominic Adesanya of Bel Air, Maryland, was in the custody of the U.S. Marshals Service for previous outstanding warrants, Secret Service spokesman Brian Leary said. Adesanya has also been charged with four misdemeanor counts of resisting arrest and unlawful entry.

This is not Adesanya’s first arrest at the executive mansion. Records show he was also charged with unlawful entry at the White House complex in late July. A court document says he told an officer that a security barrier he jumped over “was easy and that the next fence to the south grounds of the White House would not be a problem as well.”

Adesanya claimed a banking family that he said owned the Federal Reserve Bank was targeting him, and he said he wanted cameras that had been placed in his home removed, according to a court document. After the arrest he was ordered to get outpatient mental health screening and return to court Sept. 9.

He was apprehended again just three days after the July arrest at the White House complex for refusing to leave the Treasury building next door and swinging his fists at officers. Court records show he was then ordered to wear an electronic monitoring device and abide by a curfew.

Warrants for his arrest were issued after he failed to appear in court in September. An attorney representing him in those arrests did not immediately return a telephone call Thursday.

After climbing over the fence Wednesday night, Adesanya was swiftly apprehended on the North Lawn, on Pennsylvania Avenue, by uniformed Secret Service agents and their dogs. He was unarmed. President Barack Obama was at the White House at the time.

Video of the incident recorded by TV news cameras shows a man in white shorts on the lawn just inside the fence. The man lifts his shirt as if to show that he is unarmed, then is seen kicking and punching the two Secret Service dogs.

Leary said the dogs, Hurricane and Jordan, were treated by a veterinarian for minor bruising and cleared to return to duty.

The incident came about a month after a previous White House fence jumper carrying a knife sprinted across the same lawn, ran past armed uniformed agents and entered the mansion before he was felled in the ceremonial East Room and taken into custody.

That embarrassing Sept. 19 incident preceded the disclosure of other serious Secret Service breaches in security for Obama and ultimately led to Julia Pierson’s resignation as director of the agency after 18 months on the job.

After Pierson resigned, an agent who once led Obama’s protective detail came out of retirement to lead the Secret Service until Obama names a new director, pending completion of internal and independent reviews of agency practices.

This week, a federal judge delayed the arraignment of Omar Gonzalez, the man charged in September’s fence-jumping incident, because of questions about his mental fitness to stand trial.

Gonzalez has been indicted on several charges, including carrying a knife into the White House and assaulting two Secret Service officers.

Rep. Jason Chaffetz, R-Utah, who has been leading congressional investigations into the Secret Service, commended the swift response Wednesday night but said more needed to be known about Adesanya, including whether he was doing anything suspicious immediately before the incident that should have led to his detection. Chaffetz also suggested changes might be needed to “maximize the pain of going over the fence.”

“It seems a little too easy to get over,” he said.

From The Associated Press. AP writers Jessica Gresko and Erica Werner contributed to this report.