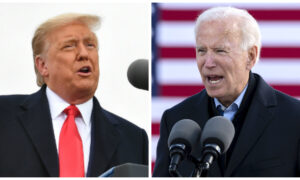 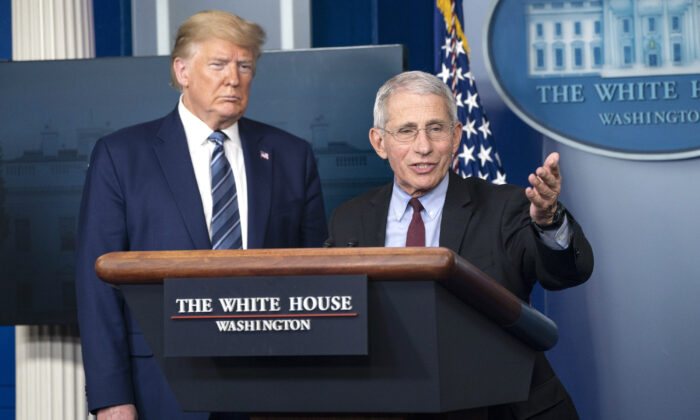 Anthony Fauci, director of the National Institute of Allergy and Infectious Diseases, speaks alongside President Donald Trump at a press briefing with members of the White House Coronavirus Task Force in Washington, on April 5, 2020. (Sarah Silbiger/Getty Images)
2020 Election

The White House lashed out after Dr. Anthony Fauci, the head of the National Institute of Allergy and Infectious Diseases, appeared to praise the campaign of Democratic presidential nominee Joe Biden for its stance on the pandemic just days before Election Day.

“It’s unacceptable and breaking with all norms for Dr. Fauci, a senior member of the President’s Coronavirus Task Force and someone who has praised President Trump’s actions throughout this pandemic, to choose three days before an election to play politics,” White House deputy press secretary Judd Deere told news outlets in a statement. “As a member of the Task Force, Dr. Fauci has a duty to express concerns or push for a change in strategy, but he’s not done that.”

Fauci said the United States is “in for a whole lot of hurt” and is “not a good situation,” referring to rising COVID-19 cases in recent days, according to the Washington Post. In the interview, Fauci again warned that the CCP (Chinese Communist Party) virus would spread in the fall and winter.

Fauci also appeared to praise Biden, saying his campaign “is taking it seriously from a public health perspective,” adding that Trump is “looking at it from a different perspective” by focusing on “the economy and reopening the country.”

Throughout the pandemic this year, Fauci has repeatedly made dire predictions to news outlets, while pushing back the date in which the United States could return to normalcy. It’s drawn criticism from the White House and President Donald Trump.

Also in the interview, Fauci said the last time he spoke with Trump “was not about any policy; it was when he was recovering in Walter Reed, he called me up,” referring to when the president contracted the CCP virus last month and was treated at Walter Reed National Military Medical Center.

Deere, meanwhile, said that Fauci should push for changes internally in his agency, although he instead chose “to criticize the President in the media and make his political leanings known by praising the President’s opponent–exactly what the American people have come to expect from The Swamp.”

Fauci’s office didn’t immediately respond to a request by The Epoch Times for comment.