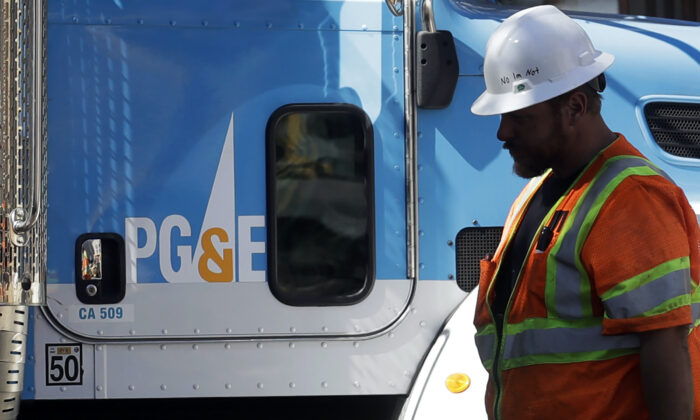 A Pacific Gas & Electric worker walks in front of a truck in San Francisco, on Aug. 15, 2019. (Jeff Chiu/AP Photo)
Inflation

The Biden administration warned that inflation numbers in March could be very high, ahead of the Bureau of Labor Statistics (BIS) inflation report scheduled to be released on Tuesday.

“We expect March CPI headline inflation to be extraordinarily elevated due to Putin’s price hike,” White House press secretary Jen Psaki said to reporters on April 11. “We expect a large difference between the core and headline inflation, reflecting the global disruptions in energy and food markets.”

The Consumer Price Index (CPI) measures inflation by checking price changes in a basket of goods and services that Americans tend to buy. This includes things like cellphones, eggs, gas, and so on. There are two versions of CPI, the headline CPI which includes all prices, and the core CPI which excludes volatile energy and food prices.

Energy prices spiked in March owing to Russia’s invasion of Ukraine. Regular unleaded gas hit its highest-ever average price of $4.331 per gallon on March 11 according to the American Automobile Association. The price has now come down to $4.098 per gallon, as of April 12, a reduction of over 5 percent in about a month.

The BIS CPI inflation report is due to come out on April 12 at 08:30 a.m. ET. February’s CPI inflation clocked in at 7.9 percent over the previous 12 months, the highest level in four decades. On a monthly basis, inflation grew by 0.8 percent.

An above 8 percent annual inflation rate can put pressure on the Federal Reserve to speed up interest rate hikes. In March, the Fed raised interest rates by 25 basis points.

Several experts have warned about higher inflation over the coming months. In a speech in early April, Agustín Carstens, general manager of the Bank for International Settlements, said that the world might be on the “cusp of a new inflationary era” during which the forces driving the inflation could persist for “some time.”

“New pressures are emerging, not least from labor markets, as workers look to make up for inflation-induced reductions in real income. And the structural factors that have kept inflation low in recent decades may wane as globalization retreats,” he said.

A newly released survey by the New York Federal Reserve showed that U.S. consumers raised their expectations of where inflation would be at the end of the next 12 months to 6.6 percent in March, the highest number since 2013, and up from 6 percent in February.

The threat of inflation has been building up over the past several months. Republicans have been warning about the situation, blaming Democrats for their spending.

“Democrats’ reckless spending has driven inflation to a three-decade high, and it’s making life harder for poor and middle-class Americans,” Sen. Mike Lee (R-Utah), ranking member of the joint committee, said in a statement in November.

“Inflation is eating into the livelihoods of American families. It’s causing them to fall further behind. The reckless spending must stop,” he said.