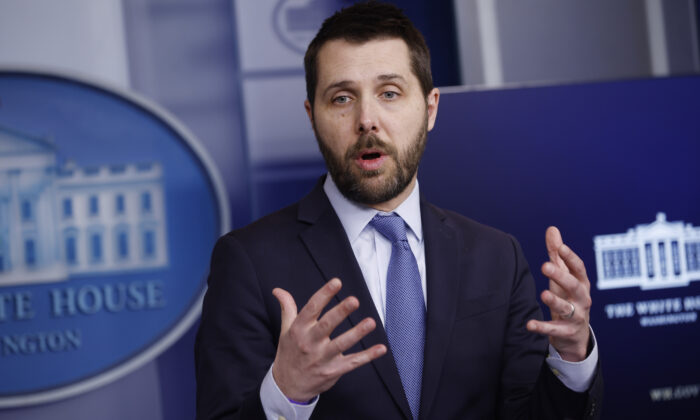 President Joe Biden’s top economic adviser played down the risk of recession in a recent interview, suggesting Americans be confident during what he called a “period of transition” of COVID-19 recovery.

It comes amid growing warnings from banks and economists that the U.S. economy could be heading into recession in the next 12 to 24 months.

“Our economy is in a period of transition. We’re moving from the strongest economic recovery in modern history to what can be a period of more stable and resilient growth,” Brian Deese, director of the White House National Economic Council, told “Fox News Sunday.”

While being asked about whether Americans should be prepared that the country is heading into a recession, the White House economic adviser repeated his previous claims and sidestepped the second part of the question from anchor Martha MacCallum.

“People should also take confidence that we are better positioned than any other country to navigate through this and keep our recovery going,” Deese said.

He then cited a recent report claiming the domestic economy may outstrip China on a calendar-year average basis for the first time in decades, which MacCallum soon directed to the reason, as Bloomberg reported, that China is in the middle of its deepest lockdown since the start of the pandemic.

Stating that the United States has “the strongest job market in modern history,” Deese admitted that gas and grocery costs “create real hardship and uncertainty” for Americans.

His remarks come as recession fears continue to mount among investors and consumers, as bankers, CEOs, and Wall Street veterans suggested a looming potential for hardship.

Last Friday, the S&P 500 Index, deemed the most accurate quantifier of the overall U.S. stock market, briefly fell into bear market territory for the first time since 2020, tumbling more than 20 percent from its record high.

Federal Reserve Bank of Minneapolis President Neel Kashkari told a town hall event in Michigan on May 17 that it is unclear if the central bank will need to trigger a recession to bring inflation down.

Yet Goldman Sachs economists believe the chances of the economy entering a recession in the next two years are still low, even as the investment bank’s equity team has just released a recession manual for its clients on how to prepare for a downturn.

“The president has made it very clear that combating inflation is his top economic priority,” Deese told Fox News. He added that the administration aims to continue giving the Federal Reserve independence to fight inflation, and lower Internet and prescription drug prices, besides further cutting down the federal budget deficit.

Andrew Moran contributed to this report.