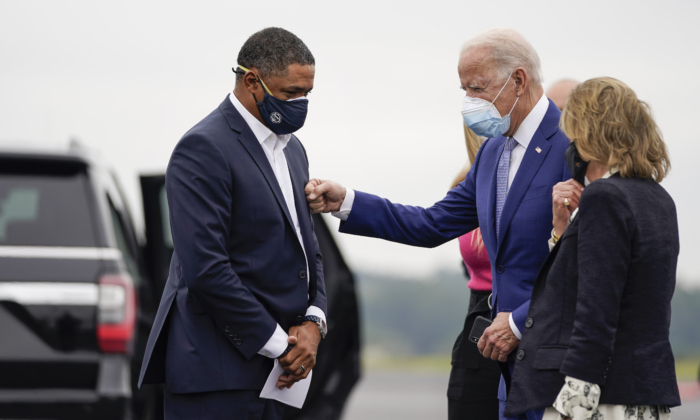 White House: Democrats Will Be ‘Disappointed’ as Party Scales Back Biden Agenda

A top White House adviser said Democrats will be disappointed as the party works to trim President Joe Biden’s agenda amid party infighting, although he predicted that two major components would be approved in Congress.

“People will be disappointed. People will not get everything they want. That is the art of legislating. But the goal here is to get both bills, and we’re going to fight until we get both bills,” Cedric Richmond, director of the White House Office of Public Engagement, told “Meet the Press” on Oct. 3.

Late last week, infighting between moderate and leftist members of the Democratic Party over the $1.1 trillion infrastructure bill and the $3.5 trillion reconciliation bill prompted a Capitol Hill visit by Biden. However, Biden left the meeting on Oct. 1, telling reporters that no deal is intact.

More moderate Democratic lawmakers have sought an immediate vote on the $1.1 trillion infrastructure bill, which was approved along bipartisan lines several weeks ago in the House. Progressives have said that there first needs to be an agreement to approve the $3.5 trillion measure, which would bolster climate initiatives and social welfare programs.

In an interview with Fox News on Oct. 3, Richmond admitted that the Biden administration is “concerned about delivering” on the agenda and noted that Biden “wants both bills and he expects to get both bills.”

When questioned about Sen. Joe Manchin’s (D-W.Va.) comment last week that he won’t support a reconciliation bill worth more than $1.5 trillion, Richmond said, “I will say that this administration, we know what we need to do, we need to deliver for the American people.”

“We think we have unity of purpose with Sen. Manchin. That’s what the president does best, and that is to talk to Sen. Manchin and make sure that he understands the entire vision of why we need to do it.”

Richmond then argued that the reconciliation bill would cost “zero,” prompting pushback from Fox News host Chris Wallace, who argued that even if more taxes were acquired from wealthier Americans and corporations, there’s still a cost that should be considered.

“At the end of the day, it will cost zero because we’re going to pay for it,” Richmond said without elaborating. “Now if you go back and look at the Trump tax cuts, which weren’t paid for, they cost billions and billions. But we’re going to pay for everything we spend here and that is not including the economic benefits and gains that we will get from it, but we know what we’re doing.”

Some analysts, Manchin, Republican lawmakers, and moderate Democrats have warned that the massive spending package would further drive up inflation, which Biden and progressives have denied.

Senate Majority Leader Chuck Schumer (D-N.Y.) said on Oct. 3 that his goal—like Biden’s—is to get both the infrastructure and budget spending bills done within the next month. Congress also has to pass a measure to either raise or suspend the debt ceiling by sometime this month.

The head of the 95-member Congressional Progressive Caucus, Rep. Pramila Jayapal (D-Wash.), said on Oct. 3 that an acceptable range for the social spending bill would be somewhere between $1.5 trillion and $3.5 trillion. Regarding Manchin’s statement, Jayapal told CNN: “That’s not going to happen. Because that’s too small to get our priorities in. So it’s going to be somewhere between 1.5 and 3.5 [trillion dollars].”