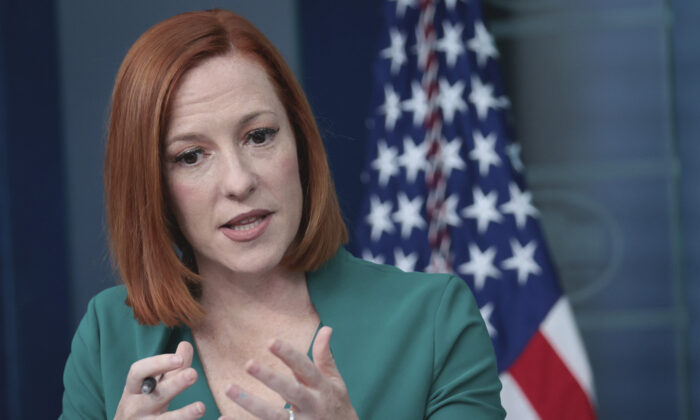 The White House on May 5 defended the right of left-wing pro-abortion activists to protest at the homes of six conservative Supreme Court Justices, and avoided characterizing them as “extreme,” with outgoing press secretary Jen Psaki instead calling for “peaceful protest.”

After the leak on Monday of a draft Supreme Court opinion that would overturn Roe v. Wade, the 1973 ruling that made abortion legal across the entire United States, protests erupted by progressive pro-abortion activists whom Psaki described as being “outraged.”

Barricades were erected around the Supreme Court and security was beefed up around the Justices.

Further, the left-wing organization Ruth Sent Us posted the supposed addresses of six conservative Justices and called for a “walk-by” protest on May 11.

“At the homes of the six extremist justices, three in Virginia and three in Maryland. If you’d like to join or lead a peaceful protest, let us know,” the group’s website states.

The group also calls for, and offers to pay, muralists and chalk artists to join the protests.

Psaki conveyed President Joe Biden’s wishes that any protests remained peaceful but stopped short of characterizing them as extreme. This is while Biden on May 4 characterized a spectrum of the GOP—what he called the “MAGA crowd”—as the “most extreme political organization” in recent American history.

“The president, for all those women, men, others, who feel outraged, who feel scared, who feel concerned, he hears them. He shares that concern and horror at what he saw in that draft opinion,” she told reporters, noting that it wasn’t a final opinion.

Biden’s direct message to anybody feeling frustrated by the Supreme Court’s draft opinion, Psaki said, is to participate in peaceful protest.

“Ensure it’s peaceful. Have your voice heard peacefully. We should not be resorting to violence in any way, shape, or form. That’s certainly what he would be conveying,” she said.

Psaki declined to say if Biden also viewed the left-wing activists who are planning protests at the homes of the Justices as “extreme.”

“Our view here is that peaceful protest—there’s a long history in the United States, in the country, of that. And we certainly encourage people to keep it peaceful and not resort to any level of violence,” she went on to say, referring to the walk-by protest.