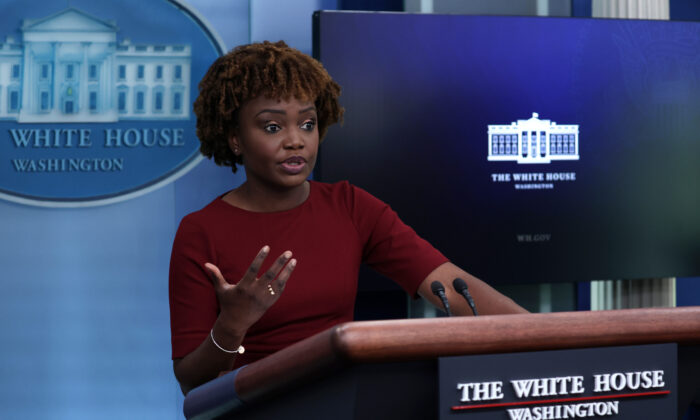 The Biden administration has rebuked Senate Minority Leader Mitch McConnell (R-Ky.) for threatening withdrawal of Republican support regarding a semiconductor bill if Democrats move ahead with their economic reconciliation bill.

“The Republican Senate leader is holding hostage a bipartisan package [semiconductor bill] to strengthen American competitiveness versus China, that would yield hundreds of thousands of manufacturing jobs in places like Southern Ohio, Idaho, and other states around the country. It would lower the cost of countless products, and end our reliance on imports,” a June 30 statement from White House Press Secretary Karine Jean-Pierre said.

She went on to claim that Senate Republicans are choosing to “help China” to outcompete the United States in a bid to protect the interests of drug companies. This takes the Republican Party’s loyalty to special interests over working-class Americans to a “new and shocking height,” Jean-Pierre said.

In a July 1 tweet, McConnell made it clear that there will be “no bipartisan” support for the Senate-passed version of the semiconductor bill called the United States Innovation and Competition Act “as long as Democrats are pursuing a partisan reconciliation bill.”

The Senate version of the semiconductor bill was passed over a year back while the House passed their own version earlier this year. Both the chambers are currently negotiating their differing versions of the bill, discussing conflict areas like tax credits for chipmakers and trade provisions.

The reconciliation bill, which originally would have cost $2 trillion over a decade, has been criticized by Joe Manchin (D-W.Va.) who raised concerns about the bill’s impact on inflation.

The semiconductor bill seeks to provide billions of dollars for research and development of new technologies for sustaining competitiveness with China. It sets aside $52 billion in incentives and grants for domestic semiconductor manufacturing.

“A robust U.S. semiconductor industry is critical for our national and economic security,” William Moss, a spokesman for Intel, said in a statement, according to Bloomberg. “The rest of the world is moving fast and Congress should put aside politics and act now to pass this critical legislation and ensure the U.S. is not left behind.”

In May, U.S. Commerce Secretary Gina Raimondo warned that the Chinese government is opposing the passage of the semiconductor bill as they know it will “enable us to outcompete them,” according to Reuters. China has already invested $160 billion in its domestic semiconductor manufacturing sector.