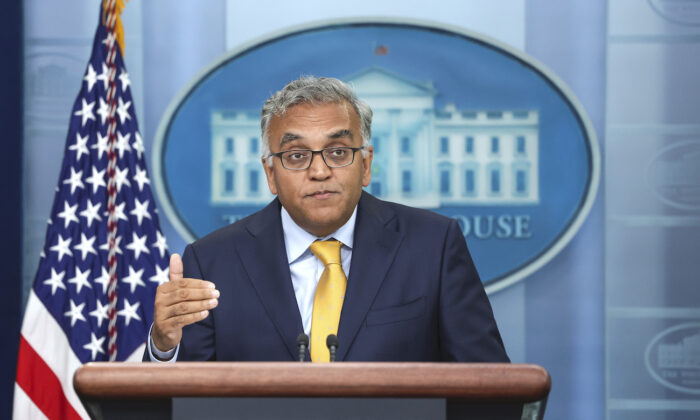 Over the past several years, “a lot of time” was spent “talking about six feet of distance, 15 minutes of being together. We realize that’s actually not the right way to think about this,” he said during a White House briefing on COVID-19.

“That’s not the most accurate way to think about this,” Jha said, adding that it is about “the quality of air you’re breathing around you.”

In a crowded indoor area with poor ventilation, people can “get infected” with COVID-19 “in minutes,” Jha said, adding that being outdoors you can be “outside for long periods of time” and not get infected.

Jha made those comments in regards to the U.S. Centers for Disease Control and Prevention (CDC) having relaxed guidelines around COVID-19. That included dropping the six-foot social distancing rule.

The agency last week rescinded a number of rules and made key updates to its recommendations, now stating that unvaccinated and vaccinated individuals should essentially be treated the same, while explicitly saying that those with a prior infection have protection against severe illness.

Starting in early 2020, federal health agencies issued a recommendation that people keep at least six feet of distance away from one another. Health departments, businesses, corporations, and schools across the United States then adopted the rule, leading to restrictions such as capacity limits and lockdowns.

A former administration for the Food and Drug Administration, Scott Gottlieb, revealed in late 2021 that the six-foot rule was made up.

“Nobody knows where it came from,” Gottlieb, a Pfizer board member, told CBS News. “Most people assume that the six feet of distance, the recommendation for keeping six feet apart, comes out of some old studies related to flu, where droplets don’t travel more than six feet.”

The CDC, he said, initially recommended a 10-foot rule, and the six-foot rule was a compromise between the federal health agency and Trump administration officials.

“So the compromise was around six feet. Now imagine if that detail had leaked out. Everyone would have said, ‘This is the White House politically interfering with the CDC’s judgment.’ The CDC said 10 feet, it should be 10 feet, but 10 feet was no more right than six feet and ultimately became three feet,” Gottlieb remarked.

The CDC also said in its update that it’s no longer recommending unvaccinated people to quarantine after exposure. Unvaccinated people who have been in close contact with an infected person aren’t advised to go through a five-day quarantine period if they haven’t tested positive or shown symptoms, according to the revised guidelines.

Regardless of vaccination status, according to the CDC, “you should isolate from others when you have COVID-19” or are “sick and suspect that you have COVID-19 but do not yet have test results.” Previously, the CDC said fully vaccinated people who were exposed could skip the quarantine period.