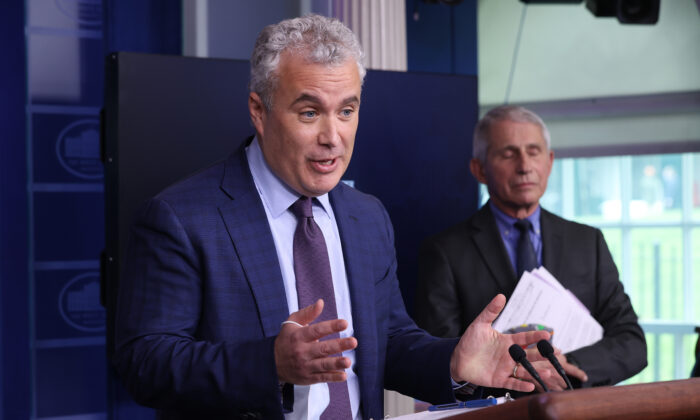 White House COVID-19 response coordinator Jeff Zients proclaimed that it is in the United States’ “national interest” to get the entire world vaccinated for COVID-19, coming after senators dropped a provision that would provide global funding in a spending package.

“It is a real disappointment that there’s no global funding in this bill. This virus knows no borders, and it’s in our national interest to vaccinate the world and protect against possible new variants,” Zients said Tuesday during a briefing at the White House.

A day before, senators said Monday that they came to an agreement to allocate $10 billion in funding for the federal government’s COVID-19 response program. No funding was provided to distribute vaccines worldwide.

“Without additional funding for a global response, we won’t have resources to help get more shots in arms in countries in need,” Zients said.

And due to the lack of funding, the United States will be “forced to scale back” certain types of treatment such as oxygen therapy and other supplies to other countries, said Zients. “Our global genomic sequencing capabilities will fall off, and that undermines our ability to detect emerging variants beyond our borders,” he added.

Since the start of the CCP (Chinese Communist Party) virus pandemic, the United States has already provided more than 500 million vaccine doses to more than 100 countries as of April 5, according to a State Department readout.

“To date, we have shipped millions of vaccines to over 40 countries in Sub-Saharan Africa, 30 countries in the Western Hemisphere, and to about 20 countries in Southern and Eastern Asia. This disease knows no borders and is affecting the entire world, and the U.S. is showing up, leading, and helping to bring an end to COVID-19,” said the agency.

Meanwhile, Zients is slated to leave his role as White House COVID-19 czar in May after spending about a year in that position, according to the White House.

“I called on Jeff Zients to lead my administration’s COVID-19 response because there is no one better at delivering results than Jeff,” President Joe Biden said in March, confirming his departure.

“He is a man of service and an expert manager,” Biden said. “I will miss his counsel and I’m grateful for his service.”

Also on Tuesday, Zients told reporters that there are no immediate plans to change federal requirements for COVID-19 testing or mask mandates for inbound international travelers.

“No, there are no plans to change the international travel requirements at this point,” he said.