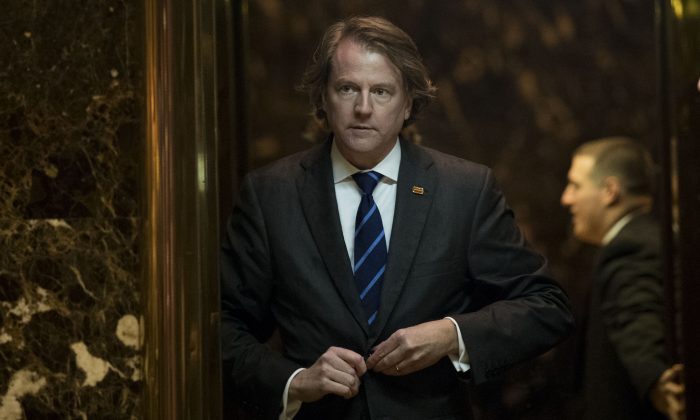 Don McGahn, then-general counsel for the Trump transition team, gets into an elevator in the lobby at Trump Tower in New York City on Nov. 15, 2016. (Drew Angerer/Getty Images)
Trump Administration

McGahn’s resignation clears the way for his replacement, Pat A. Cipollone, a specialist in defamation defense and complex litigation. Cipollone’s talents could prove useful for Trump if Democrats—who promise extensive investigations of Trump—recapture the House of Representatives in the Nov. 6 elections.

When Justice Antonin Scalia died in February 2016, McGahn was Trump’s campaign attorney. It was McGahn’s idea that candidate Trump make and publicize a list of conservative judges from which he could select Scalia’s replacement, if elected.

“That list would prove to be a key selling point for Trump among social conservatives, who otherwise might have been skeptical of a thrice-married billionaire from New York City,” according to NPR.

“McGahn oversaw the president’s judicial selection process, picking nominees who are uniformly conservative—often suggested by the Federalist Society or the Heritage Foundation—and typically young—capable of shaping the federal courts’ decisions for decades to come.”

“Don is the most impressive White House Counsel during my time in Washington, and I’ve known them all,” Senate Majority Leader Mitch McConnell (R-Ky.) said at the time. “Don’s significance to the judiciary, the White House and the nation cannot be overstated, and I look forward to his continued efforts on behalf of our country.”

George Hartmann, a spokesman for Senate Judiciary Committee chairman Chuck Grassley (R-Iowa), said in August that the senator “has appreciated Mr. McGahn’s work over the last two years and has considered him integral to the president’s record-breaking success on filling judicial vacancies.”

But McGahn’s nearly two years inside the White House were filled with tumult.

Critics blamed him unfairly for Trump’s executive orders banning travel from Islamic terrorism-producing nations and punishing so-called sanctuary cities for harboring illegal aliens, claiming the orders were open to attack because they were supposedly poorly written.

Not all of his judicial picks made it through the Senate. According to Time magazine, McGahn tried to select judicial candidates who were “too hot for prime time … the kind of people that make some people nervous.”

He also reportedly made White House officials antsy by sitting down with investigators working for special counsel Robert Mueller “for about 30 hours in at least three interviews, without his lawyer offering a full debrief to the president’s attorneys on what was said during those sit-downs,” the Washington Examiner reported.

Trump wrote in a tweet on Aug. 18 that he “allowed” McGahn “and all other requested members of the White House Staff, to fully cooperate with the Special Counsel.”

McGahn pressed Trump not to fire Mueller, reportedly threatening to resign if Trump followed through with the dismissal, and argued with the president over his reported desire to pardon his former campaign manager Paul Manafort, who was convicted of offenses that arose out of Mueller’s Russia investigation but had nothing to do with the Trump campaign.

Trump himself denied McGahn lobbied him about Mueller. On Aug. 30, he wrote on Twitter that McGahn “was NOT responsible for me not firing Bob Mueller or [Attorney General] Jeff Sessions. So much Fake Reporting and Fake News!”

Nevertheless, it was around two weeks after McGahn’s cooperation was reported that the president announced Aug. 29 on Twitter that his counsel would soon be leaving.

Another one of Trump’s attorneys, former New York Mayor Rudy Giuliani, said McGahn’s discussions with Mueller had nothing to do with his decision to leave the White House.

It is unclear what McGahn will do next. He could return to private legal practice and represent Trump’s reelection campaign. Formerly with the powerhouse law firms of Patton Boggs and Jones Day, he served as general counsel to the National Republican Congressional Committee and as counsel for the Illinois Republican Party. McGahn became a member of the Federal Election Commission in July 2008, serving as its vice chairman from January 2013 to 2015.

Trump said Oct. 16 before news broke of McGahn’s resignation that he would be replaced by Cipollone, whom the president recently described as “a great guy” who was “very talented.” Cipollone is identified as a litigation partner at the law firm of Stein Mitchell Cipollone Beato and Missner. He “also has substantial expertise in defamation counseling and litigation on behalf of corporations, organizations, and public figures, including prepublication negotiations and/or litigation with major media organizations,” according to his online biography.