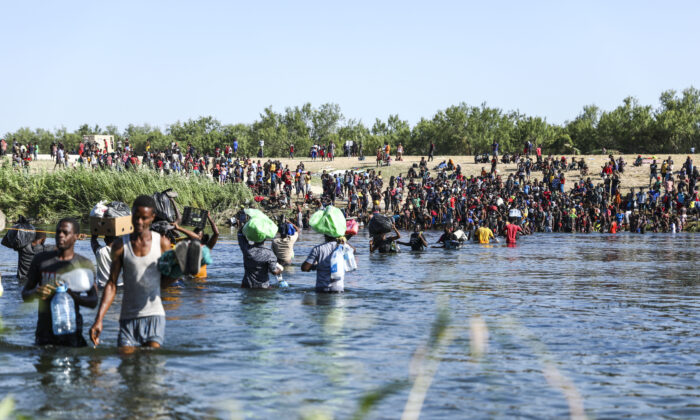 Illegal immigrants take supplies back and forth between Acuña, Mexico, and the United States (far side) across the Rio Grande, the international boundary with Mexico, in Acuña, Mexico, on Sept. 20, 2021. (Charlotte Cuthbertson/The Epoch Times)
Immigration & Border Security

An estimated 60,000 Haitians are heading to the border
By Jack Phillips

The White House confirmed it is helping Texas authorities prepare for a surge of tens of thousands of Haitians who are heading to the U.S.–Mexico border.

“As you can imagine, we’re working with the leaders in the region on this issue of migrants coming to the border, but we do have a system in place that we’re going to continue to follow,” White House deputy press secretary Karine Jean-Pierre said in response to a question during a briefing on Tuesday. “We continue to have the push factors in telling folks, ‘This is not the time to come,’ and we’re going to continue to do what we’ve been doing in the past.”

Several officials in Central American countries recently warned that an estimated 60,000 Haitians are heading to the U.S. border.

“We have seen the growing phenomenon of irregular migration and have gained the attention of key actors,” Panama Foreign Minister Erika Mouynes said in a statement released by the Foreign Ministry on Sept. 30.

“We’ve engaged with every single authority that we can think of, that we can come across, to say, ‘Please, let’s pay attention to this,” Mouynes told Axios. The Biden administration, she added, needs to come up with a plan.

On Tuesday, Jean-Pierre stated that the Biden administration will use Title 42 to expel certain individuals who cross into the U.S. illegally, noting that “families and single adults are expelled under the [Centers for Disease Control and Prevention] directive when possible.”

“The determination of who can be expelled or not is determined by a number of factors, including the makeup of the specific family unit and agreements with the country of origin or last residence,” she added. “As we have stated, those who cannot be expelled are placed into removal proceedings.”

In anticipation of the wave of Haitian illegal immigrants, Texas Gov. Greg Abbott wrote Tuesday that his state will continue to add more and more National Guard members and Texas Department of Public Safety personnel to the border.

Thousands of Haitian illegal immigrants created a makeshift encampment underneath a bridge in Del Rio, Texas, before the federal government moved them out of the area late last month. Homeland Security Secretary Alejandro Mayorkas said that around 12,000 of 17,000 Haitians were sent to areas inside the United States.

As thousands of Haitians resided in the bridge shantytown, some public health experts expressed concerns that COVID-19 or other transmissible diseases including measles could spread.