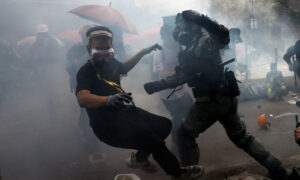 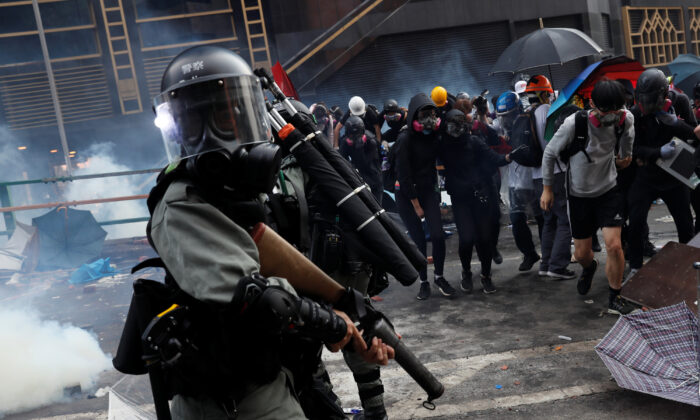 “We condemn the unjustified use of force and urge all sides to refrain from violence and engage in constructive dialogue,” said an unnamed senior U.S. official in the Trump administration on Nov. 17, according to Reuters.

The official added: “As the President has said, the United States expects Beijing to honor its commitments under the Sino-British Joint Declaration and to protect Hong Kong’s freedom, legal system and democratic way of life.”

The clashes at PolyU began at 2 p.m. local time on Nov. 17 and lasted into the morning on Nov. 18, when police fired tear gas, water cannons, and deployed a sonic device against protesters who hurled petrol bombs and fired arrows.

The intense battle between the two sides was the result of protesters blocking a cross-harbor road tunnel near the university in an attempt to pressure the Hong Kong government into fulfilling their five demands, including universal suffrage.

Police broke through the main entrance of the university where protesters had been holding up with makeshift barricades at around 5:30 a.m. local time, making several arrests.

Police have since made massive arrests. At areas near Chichen Golden Plaza, which is about 5-minutes walking distance from PolyU, Hong Kong media reported that police had arrested at least 100 people. Some of them were trying to get to the university to support the protests.

Police also arrested Lo Kin-hei, vice chairman of Hong Kong’s Democratic Party, with a dozen others from Energy Plaza, which is located about 500 meters (0.3 miles) from PolyU.

Outside of Hotel Icon, which is about 3-minute walking distance from PolyU, police arrested at least another 40 people, according to Hong Kong media.

The reason for the arrests has not been confirmed. Some of the protesters arrested were dressed in black—a color that many protesters have adopted since the current protests began in June.

Earlier, Hong Kong media reported that there were still about 500 protesters trapped inside PolyU. When they tried to leave the school campus, they were forced back by tear gas from police.

Protesters’ attempt to leave PolyU came after a pre-recorded announcement by head of the school Teng Jin-Guang at around 7 a.m. local time. Teng said that he had reached an agreement with the police for a ceasefire on the condition that protesters did not initiate any use of force.

“We have also permission from the police for you [protesters] to leave the campus peacefully, and I will personally accompany you to the police station, to ensure that your case will be fairly processed,” Teng said.

Teng has since been criticized for failing to look after his students, including by president of PolyU’s student union, Derek Liu.

Liu called on the international community to follow the protest at his school, and urged other Hongkongers to continue to take strike actions, while speaking to a local radio broadcaster on the morning of Nov. 18.

Washington-based nonprofit Hong Kong Democracy Council, called on the White House, the State Department, and leaders in Congress to meet with China’s ambassador to the United States, Cui Tiankai, to make “clear to China the U.S. will not tolerate HK Govt & police’s violent crackdown against its own citizens,” according to a tweet on Nov. 17.

Civil Human Rights Front (CHRF), the main organizer behind many of the massive marches in recent months, issued a statement on Facebook at midnight on Nov. 18, urging the Hong Kong police to stop using lethal force against protesters.

“We also urge [the] international community to join our appeal for de-escalation of state violence, and the retreat of riot police near the campus,” CHRF stated.

Several U.S. lawmakers have responded to the violence at PolyU.

Josh Hawley (R-Miss.), in a tweet on Nov. 17, condemned police’s assault on defenseless students, saying “Beijing is pushing Hong Kong into a state of siege.”

24 lawmakers of Hong Kong’s pro-democracy camp, in a joint statement on Nov. 18, urged the police and protesters at PolyU to all take a step back to de-escalate the crisis.

The international community should urge the Hong Kong government to show restraint and stop the police from any more violence on the city’s college grounds, according to the statement.