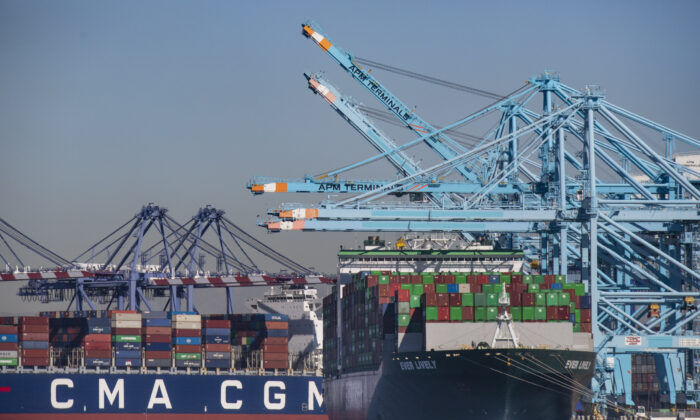 Cargo containers are stacked on a ship at the Port of Long Beach, Calif., on Oct. 27, 2021. (John Fredricks/The Epoch Times)
Southern California

The White House’s response this week to the ongoing supply chain crisis at the ports was “callous,” according to California’s top Republican representative.

President Joe Biden’s Port Envoy John D. Porcari, who was assigned to work with the ports, said the crisis was “a good problem.”

The busy Los Angeles and Long Beach ports are at the center of a national supply chain snarl.

Port authorities are dealing with a backlog of shipping containers stored at the terminals, adding to the national consumer goods backlog.

“What you see behind you, with containers everywhere and lots of activity, is an economy roaring back to life,” Porcari said at a press conference held at the Los Angeles Port Nov. 17. “This is a good problem to have.”

House Minority Leader Kevin McCarthy (R-Calif.), of Bakersfield, responded that the comments were proof of the administration’s disconnect with Americans’ plight.

“There is nothing ‘good’ about the current supply crisis we are living through right now,” McCarthy said in an emailed statement to The Epoch Times.

“Americans across the country are facing higher costs and experiencing a scarcity of goods,” McCarthy added. “This has been especially crushing for hardworking families already struggling to keep up with the skyrocketing inflation that has emerged because of the failed policies of this administration.”

The Labor Department reported last week that inflation jumped in October by 6.2 percent from a year ago. That was the largest increase since 1990, according to the Wall Street Journal.

“The White House’s callous response is more proof that they are completely disconnected from the plight facing millions of our own citizens,” McCarthy said.

More Americans say the nation’s economy is getting worse, according to a Nov. 18 Quinnipiac University Poll. The university polled 1,378. U.S. adults nationwide from Nov. 11–15.

Most Americans (68 percent) polled said increased prices for things such as food and gasoline have caused them to change their spending habits and 30 percent say it has not.

A majority, or 53 percent, said they could not find the groceries they wanted to buy, while 52 percent said they experienced long delays of delivery for the items they purchased.

Cargo ships lined up in record numbers again this week, waiting to offload goods at the port, with 167 ships docked or floating in the ocean Nov. 17, the Marine Exchange of Southern California reported.