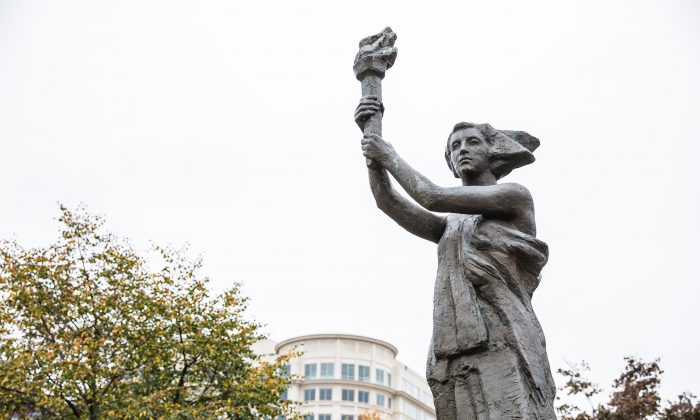 It was 100 years ago, between Nov. 6 and Nov. 9, 1917, that a small group of Red Guards under Vladimir Lenin seized the Winter Palace in Russia and established a communist regime, marking the beginning of a century in which more than 100 million people would be killed by the ideology of communism, rooted in atheism and struggle.

The White House commemorated the victims of communism on Nov. 7, proclaiming it National Day for the Victims of Communism.

“Over the past century, communist totalitarian regimes around the world have killed more than 100 million people and subjected countless more to exploitation, violence, and untold devastation,” said the office of the White House press secretary, in a statement.

“These movements, under the false pretense of liberation, systematically robbed innocent people of their God-given rights of free worship, freedom of association, and countless other rights we hold sacrosanct. Citizens yearning for freedom were subjugated by the state through the use of coercion, violence, and fear,” it said.

The Victims of Communism Memorial Foundation says America has never before had a day recognizing the victims of communism.

Today, many people still suffer under communism, including in North Korea and its complex system of labor camps, and in China under its persecution of religions, including Falun Gong, Christianity, Tibetan Buddhism, and Islam.

These persecutions follow trends seen under nearly all communist regimes. Examples include the genocide of intellectuals under the Cambodian Khmer Rouge, the genocides and brutal gulag system under Soviet leader Josef Stalin, the destruction of Chinese culture under Mao Zedong, and many others.

Before leading the Bolshevik Revolution, Lenin’s movement functioned as a terrorist group. In 1906, he wrote in Proletary magazine that he aimed at “assassinating individuals, chiefs, and subordinates in the army and police” and on seizing money from governments and individuals.

After taking power in 1917, Lenin had tens of thousands of people arrested for opposing his new system, and many were tortured and executed.

Lenin also forbade private property and sent his guards to seize food and seeds from peasants throughout Russia. When the peasants were unable to plant their crops, a famine swept the country; according to the Hoover Institution, from 1921 to 1922, between 5 million and 10 million people died.

Rather than show remorse for his man-made famine, Lenin expressed joy. According to “The Black Book of Communism,” a man close to Lenin said the dictator believed the famine “would bring about the next stage more rapidly, and usher in socialism, the stage that necessarily followed capitalism.”

He stated that the famine “would also destroy faith not only in the tsar, but in God, too.”

The White House release said that on the day marking 100 years since the Bolshevik Revolution, “we remember those who have died and all who continue to suffer under communism.”

The White House also honored the memory of the “indomitable spirit of those who have fought courageously to spread freedom and opportunity around the world.”

“Our nation reaffirms its steadfast resolve to shine the light of liberty for all who yearn for a brighter, freer future,” it said.

During an Oct. 6 event at the White House celebrating Hispanic Heritage Month, President Donald Trump stated, “The same failed communist ideology that has brought oppression to Cuba has brought nothing but suffering and misery everywhere and [in] every place it has been, anywhere in the world.”

“Communism is the past. Freedom is the future,” Trump said, to cheers and applause from the crowd.