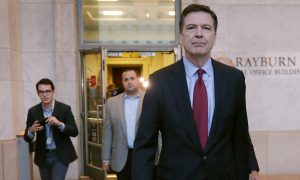 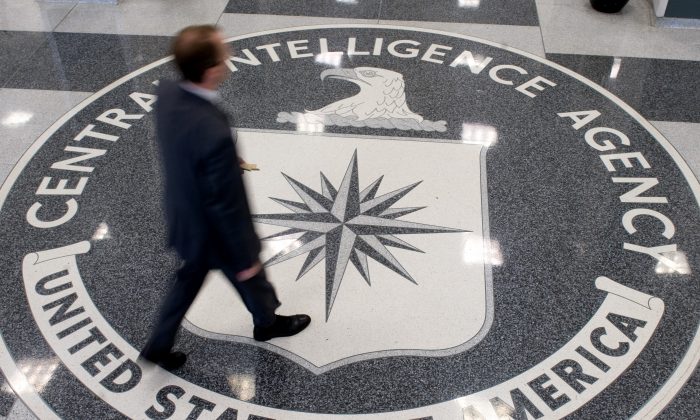 In this file photo a man crosses the Central Intelligence Agency (CIA) seal in the lobby of the CIA Headquarters in Langley, Va. (Saul Loeb/AFP/Getty Images)
US News

The White House said CNN’s report about the extraction of a Russian spy potentially put lives in danger while challenging the premise of the report itself.

“CNN’s reporting is not only incorrect, it has the potential to put lives in danger,” Press Secretary Stephanie Grisham said in a statement.

The latest report, based solely on anonymous sources, was challenged by information from other outlets, the CIA, and, later, CNN itself.

Former Obama administration official Jim Sciutto wrote that that the United States extracted a top spy from inside Russia in 2017, attempting to blame President Donald Trump’s handling of classified intelligence.

But after the New York Times reported on the spy’s extraction, the newspaper said it had nothing to do with Trump.

“Former intelligence officials said there was no public evidence that Mr. Trump directly endangered the source, and other current American officials insisted that media scrutiny of the agency’s sources alone was the impetus for the extraction,” it said.

Instead, the CIA ordered the extraction because of media inquiries, according to the paper.

After the new report, Sciutto said on Twitter that the United States “offered extraction months earlier during [the] Obama administration,” seemingly contradicting his own reporting on the issue.

2/Asset had risen to the highest levels of Russia’s national security infrastructure. US offered extraction months earlier during Obama administration, but asset refused. Asset’s information was crucial to IC assessment that Putin had directed election interference to favor Trump

The original story, which was published on Sept. 9, has been updated but not corrected.

Sciutto’s position in the Obama administration is not mentioned anywhere on the page or the landing page for his profile on CNN’s website. The user has to click “full bio” to go through to his full profile, which notes that he served as chief of staff and senior advisor to the U.S. Ambassador to China, Gary Locke, though it doesn’t inform the user which administration he worked for.

The CIA blasted the report by CNN, telling the outlet in a statement: “CNN’s narrative that the Central Intelligence Agency makes life-or-death decisions based on anything other than objective analysis and sound collection is simply false.”

“Misguided speculation that the President’s handling of our nation’s most sensitive intelligence—which he has access to each and every day—drove an alleged exfiltration operation is inaccurate,” spokeswoman Brittany Bramell said.

Aaron Mate and Chuck Ross, frequent media critics, noted in a series of posts on Twitter that the Washington Post and Times seemed to endanger the spy by citing them in previous reports while CNN has had multiple stories relying on anonymous sources heavily challenged.

…the obvious question is: what is the actual agenda of the intel officials leaking false and/or misleading information, & why are some prominent journalists carrying their water, instead of asking this obvious question?

The Post, for example, reported in June 2017 of “‘sourcing deep inside the Russian government'”—so deep that it purportedly ‘captured Putin’s specific instructions’ to launch a pro-Trump influence campaign. (NSA & other intel officials later questioned this claim),” Mate, a host for the Grayzone Project, noted.

“The irony that CNN’s story yesterday tried to blame Trump for having to extract a Kremlin spy. Instead, it was leaks like the one to CNN that spurred the extraction,” added Ross, a reporter at the Daily Caller News Foundation.

“If history is any guide, CNN won’t own up to this colossal mistake though. Sciutto still hasn’t retracted his Cohen-Don Jr. story, and CNN still hasn’t explained how they [expletive] up the Don Jr. WikiLeaks email report.”