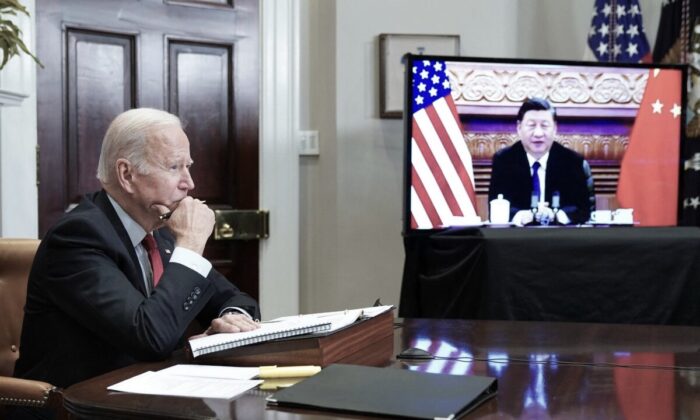 President Joe Biden will likely meet with Chinese Communist Party (CCP) leader Xi Jinping later in the year for the pair’s first face-to-face, according to a White House official.

Kurt Campbell, White House Coordinator for the Indo-Pacific, confirmed that Biden and Xi agreed to set up a face-to-face meeting during their last conference call in July, but that there were “no details” about the time and location for that meeting.

During that last call, Xi said that the United States was “playing with fire” by allowing congressional delegations to visit Taiwan, continuing a trend of increasingly bellicose rhetoric from Beijing that has included outright threats of war against the United States.

Since that time, House Speaker Nancy Pelosi visited Taiwan, an event which the CCP used as pretext to launch a series of escalatory military exercises around Taiwan which interfered with international travel and commerce.

Those exercises, which were widely condemned by the international community, also saw China launch several ballistic missiles that flew over Taiwan and landed in the waters of Japan’s exclusive economic zone.

The CCP maintains that Taiwan is a rogue province of China that must be united with the mainland, and has vowed to use force to achieve that goal if coercion fails. Democratic Taiwan has been self-governed since 1949, however, and has never been controlled by the CCP.

The United States formally recognizes, but does not endorse, China’s position. It is also treaty-bound to provide Taiwan with the arms necessary for self-defense.

“Last week the PRC used a visit of the [U.S. Speaker of the House] … as a pretext to launch an intensified pressure campaign against Taiwan,” Campbell said.

“China has overreacted and its actions continue to be provocative… [and] destabilizing.”

Campbell added that the Chinese communist regime was attempting to unilaterally change the status quo regarding Taiwan, in violation of more than 60 years of U.S.-China agreements.

The regime’s decision to abruptly cut military communications with the United States in the region and to back out of all climate ties represented a major escalation by the CCP, he said. Moreover, he added, the regime’s continued military incursions across the median line of the Taiwan Strait were part of a systematic attempt to “intimidate and coerce Taiwan” and others to accept a new status quo in the region.

“China’s actions are fundamentally at odds with peace and stability,” Campbell said.

Campbell reiterated the United States’ ambition to preserve peace in the Taiwan Strait and the broader Indo-Pacific, affirming recent remarks by the White House that the U.S. military would continue to conduct freedom of navigation operations through the Taiwan Strait, undeterred by Chinese aggression.

“This is what the world demands of responsible powers.”