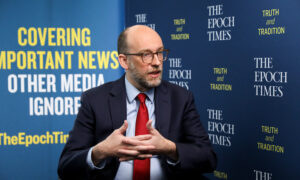 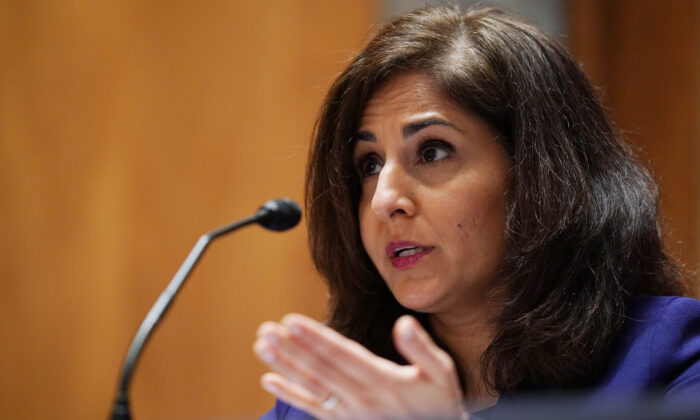 Neera Tanden, nominee for Director of the Office of Management and Budget, speaks during a confirmation hearing before the Senate Homeland Security and Government Affairs Committee in Washington, D.C., on Feb. 9, 2021. (Leigh Vogel/Pool/Getty Images)
Executive Branch

Sen. Bernie Sanders (I-Vt.) told reporters at the Capitol on Wednesday that her two confirmation hearings were postponed because she “didn’t look like she had the votes.”

“I think there’s no secret she’s lacking the votes right now and she’s working hard to try to get the votes,” Sanders told reporters at the Capitol on Wednesday, when asked about postponing the vote.

This comes as two Senate committees delayed confirmation votes for the nominee, which is signaling pessimism that Tanden may not be able to get through the confirmation.

The Senate Homeland Security and Governmental Affairs Committee and the Senate Budget Committee were scheduled to vote on Tanden’s nomination on Wednesday.

White House chief of staff Ron Klain said on Wednesday that if Neera Tanden, President Joe Biden’s pick to lead the Office of Management and Budget, is not confirmed, then they would find her another role in the administration.

“If Neera Tanden is not confirmed, she will not become the budget director,” Klain during a television appearance on MSNBC. “We will find some other place for her to serve in the administration that doesn’t require Senate confirmation.”

“But let me be clear: We’re going to get Neera Tanden confirmed. That’s what we’re working for. And she will prove her critics wrong as an outstanding budget director that works with people on both sides of the aisle,” he added.

Senators from both sides of the aisle have expressed their reservations about the nominee, noting her incendiary statements that had insulted lawmakers, including those who are currently in office.

Her statements include calling Sen. Tom Cotton (R-Ark.) a “fraud” and accusing Sen. Mitch McConnell (R-Ky.) of being beholden to Russia. She also wrote in an essay that opposition to abortion became “successful as a political cudgel, helping isolate extreme anti-choice advocates from the mainstream.”

Similarly, Sen. Joe Manchin (D-W.Va.) said on Feb. 19 that he will not support Tanden due to her partisan statements aimed at lawmakers on both sides of the aisle.

“I have carefully reviewed Neera Tanden’s public statements and tweets that were personally directed towards my colleagues on both sides of the aisle from Senator Sanders to Senator McConnell and others. I believe her overtly partisan statements will have a toxic and detrimental impact on the important working relationship between members of Congress and the next director of the Office of Management and Budget,” Manchin said in a statement.

Sen. Lisa Murkowski (R-Alaska), who may be a swing vote, has not made up her mind about Tanden, telling reporters that she has yet to look into the nominee and her comments that have made about the senator. Murkowski said she has not talked to the nominee.

“You know, I suggested to the White House that my colleagues were being very critical of the statements, and rightly so I think some of them were clearly over the top. It seems that in this world we’ve kind of gotten numb to derogatory tweets. I don’t think that that is, that’s a model that we want to set for anybody, whether it’s a nominee, whether it’s a president, or whether it’s a senator—so I’d like us all to cool that,” Murkowski said.

“So I was trying to look at competence, but apparently I’m going to have to do more looking into what she thinks about me,” she added.

Senate Minority Leader Mitch McConnell (R-Ky.) told reporters on Capitol Hill on Wednesday that he hoped every Republican would oppose Tanden, although some have yet to make up their minds, including Sen. Chuck Grassley (R-Iowa.).

Although the Biden administration is preparing for an undesirable outcome of Tanden’s confirmation, Klain said the White House is still “fighting our guts out to get her confirmed.”

White House press secretary Jen Psaki said on Wednesday that the Biden administration believes Tanden is “a leading policy expert” who would bring “critical qualifications to the table during this time of unprecedented crisis.”

Tanden would need to get at least 50 votes in order to be confirmed. Since Manchin said he would not back Tanden, Democrats need to get at least one Republican to their side. Other likely swing votes such as Sens. Mitt Romney (R-Utah) and Susan Collins (R-Maine) have indicated they won’t.