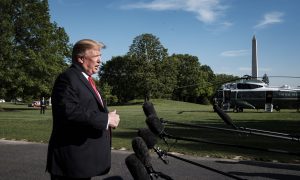 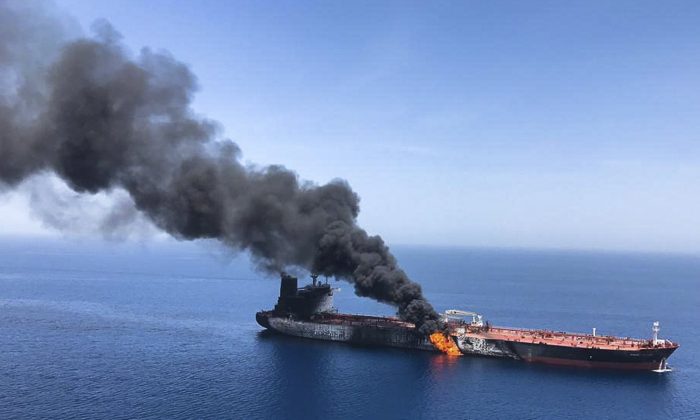 The White House on June 13 blamed Iran for the attack on two oil tankers in near the strategic Strait of Hormuz.

“This assessment is based on intelligence, the weapons used, the level of expertise needed to execute the operation, recent similar Iranian attacks on shipping, and the fact that no proxy group operating in the area has the resources and proficiency to act with such a high degree of sophistication,” Pompeo also told reporters.

He added that “the international community condemns Iran’s assault on the freedom of navigation and the targeting of innocent civilians.” The United States, he continued, would defend its interests and partners.

Sec. Pompeo says the US blames Iran for the attacks on 2 tanker ships in the Gulf of Oman today; says US will raise the issue with UN Security Council today – @NBCNews pic.twitter.com/JNAsKesqZo

“It is the assessment of the U.S. government that Iran is responsible for today’s attacks in the Gulf of Oman. These attacks are a threat to international peace and security, a blatant assault on the freedom of navigation, and an unacceptable escalation of tension by Iran,” he wrote.

Pompeo also didn’t say what the U.S. would use “economic” and “diplomatic” pressure to deal with Iran amid its “threats … to peace and security.”

Iran has not claimed responsibility for the attacks. Some reports indicated that a torpedo was fired at least one of the vessels, but other reports said that it was a mine or another type of weapon.

“U.S. Naval Forces in the region received two separate distress calls at 6:12 a.m. local time and a second one at 7:00 a.m. U.S. Naval Forces Central Command received the calls from the M/V Front Altair and M/V Kokuka Courageous, who were operating in international waters of the Gulf of Oman. USS Bainbridge (DDG 96) was operating in the vicinity and provided immediate assistance to the M/V Kokuka Courageous. Twenty-one mariners from the M/V Kokuka Courageous, who abandoned ship, are currently aboard USS Bainbridge. A Navy P-8 is also providing support,” the U.S. Navy said in a statement.

It is the assessment of the U.S. government that Iran is responsible for today’s attacks in the Gulf of Oman. These attacks are a threat to international peace and security, a blatant assault on the freedom of navigation, and an unacceptable escalation of tension by Iran. pic.twitter.com/cbLrWNU5S0

Tensions between Iran and the United States, along with its allies including Saudi Arabia, have risen since Washington pulled out of a deal last year between Iran and global powers that aimed to curb Tehran’s nuclear ambitions.

Iran has repeatedly warned it would block the Strait of Hormuz, near where the attacks happened, if it cannot sell its oil due to U.S. sanctions.

The crew of the Norwegian-owned Front Altair abandoned ship in waters between Gulf Arab states and Iran after a blast that a source said might have been from a magnetic mine. The ship was ablaze, sending a huge plume of smoke into the air.

The crew were picked up by a passing ship and handed to an Iranian rescue boat.

The second ship, a Japanese-owned tanker, was hit by a suspected torpedo, the firm that chartered the ship said. Its crew were also picked up safely. However, a person with knowledge of the matter said the attacks did not use torpedoes.

NTD reporter Jeremy Sandberg and Reuters contributed to this report.