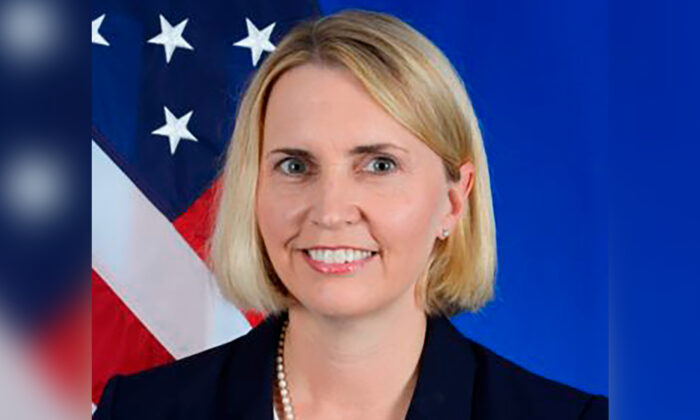 President Joe Biden announced his nominee to serve as ambassador to Ukraine Monday, seeking to fill a diplomatic position that has been vacant for nearly three years and support the country fending off Russian invasion.

Biden plans to tap Bridget Brink, the current U.S. ambassador to the Slovak Republic, to serve in the role.

Brink is a veteran diplomat with 25 years in the U.S. Foreign Service focusing on advancing U.S. policy in Europe and Eurasia. She has served in the State Department’s Bureau of European and Eurasian Affairs and at the U.S. Embassies in Tashkent, Uzbekistan, and Tbilisi, Georgia. She was also the director for the Aegean and the South Caucasus at the National Security Council and has served in multiple other roles in the State Department.

Brink is from Michigan. She speaks Russian and holds multiple advanced degrees.

The nomination requires Senate approval. Brink was confirmed by unanimous voice vote in 2019 when former Republican President Donald Trump nominated her for her current position in Bratislava.

“If confirmed, Ambassador Brink will lead our diplomatic mission in Ukraine with dedication and distinction,” said the State Department in a statement.

The United States has been without an ambassador to Ukraine since 2019 when Trump abruptly recalled Marie Yovanovitch from the post.

The nomination announcement came during a weekend trip by Secretary of State Antony Blinken and Secretary of Defense Lloyd Austin to Ukrainian capital Kyiv, where they met President Volodomyr Zelenskyy and other top Ukrainian officials.

The State Department also announced that U.S. diplomats will be returning to Ukraine this week after leaving the country for Poland two weeks before the Russian invasion. The diplomats previously worked out of the U.S. Embassy in Ukraine’s capital of Kyiv, but will make their return to the western Ukrainian city of Lviv.

“The increased U.S. presence demonstrates our support for Ukraine and is part of the U.S. commitment to return our diplomats to our Embassy in Kyiv as soon as possible,” the State Department said in a statement.

Russia began its invasion of Ukraine on Feb. 24. The number of refugees who have since fled Ukraine has surpassed 5 million. Another 7.7 million have been displaced within the country, according to the U.N.