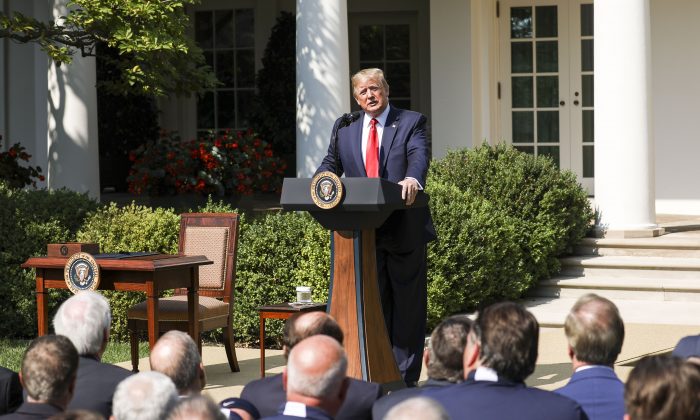 White House: All Democratic Members of Congress Invited to Attend Trump’s Signing of 9/11 Bill, None Attend

No Democratic members of Congress attended the event featuring President Donald Trump signing a bill on July 29 to extend the compensation fund for the Sept. 11, 2001 terror attack survivors, despite all of them receiving invitations, according to the White House.

A White House official told the pool reporter that every single member of Congress was invited to the ceremony but none of the Democrats showed up to the event.

“Following up on the guest list the White House provided for the 9/11 event—which notably did not include any Democratic lawmakers—an official tells me the following on background: Every member of Congress was invited to attend today’s event,” the reporter said.

The House and the Senate are both in recess.

Former New York City Mayor Rudy Giuliani, former New York Mayor George Pataki, and over 100 individuals impacted by the attacks, including widows, siblings, and children of people who died in the attacks attended the event.

New York Gov. Andrew Cuomo, staunch Democrat and bill promoter Jon Stewart, and New York City Maor Bill de Blasio were not at the White House for the signing. It was not clear if they were invited.

The bill reauthorized the fund through Fiscal Year 2092.

During the ceremony, Trump stated: “I want to thank lawmakers in both parties for working with common purpose to pass this vital and critical legislation.”

See the full remarks made by the president at the ceremony below:

Thank you very much. Well, thank you very much, everybody. Please, sit down. Very important day. And we’re gathered this morning at the White House to honor our solemn duty to America’s best, bravest, and finest, who I know so well. In a few moments, I will sign a bipartisan bill to fully reauthorize the 9/11 Victims Compensation Fund. So, the 9/11 Victims Compensation Fund is something you’ve all worked on very hard, and the day has come.

Today, we come together as one nation to support our September 11th heroes, to care for their families, and to renew our eternal vow: Never, Ever Forget.

Before I go further, this morning we express our deepest sadness and sorrow for the families who lost a precious loved one in the horrific shooting last night in Gilroy, California. While families were spending time together at a local festival, a wicked murderer opened fire and killed three innocent citizens, including a young child. We grieve for their families and we ask that God will comfort them with his overflowing mercy and grace. We’re praying for those who are recovering right now in the hospital. Some very, very serious injuries.

We thank the brave members of law enforcement—they never let us down—who swiftly killed the shooter. We reaffirm our national will to answer violence with the courage, determination, and resolve of one American family. We will continue to work together as communities and as citizens to stop evil, prevent violence, and protect the safety of all Americans.

We’re joined for today’s ceremony by our wonderful Vice President, Mike Pence. Thank you, Mike, very much. Thank you. Along with many distinguished guests.

I want to begin by recognizing a leader many of you know very well. On September 11th, he declared, “The city of New York and the United States of America is much stronger than any group of barbaric terrorists…our strength and our willingness to defend ourselves will ultimately prevail.” And he was right. A great mayor of the city of New York—our greatest mayor, in my opinion. Now, what do I know? Rudy Giuliani. Stand up, Rudy. Great job, Rudy. Great job. Rudy has got a lot of guts.

In the wake of the September 11th attacks, courageous Americans raced into smoke, fire, and debris in lower Manhattan, the Pentagon, and a field in Shanksville, Pennsylvania. The whole world witnessed the might and resilience of our nation in the extraordinary men and women of the New York Fire Department and the New York Police Department, selfless patriots of unmatched character and devotion. I grew up with them so I can tell you that’s absolutely true. It’s always nice to really know your subject. I know that subject. These are great people.

We also commemorate the heroes of the Port Authority Police. And I want to thank you all for being here. Tremendous people. The first responders from across the country rushed to New York and worked endless days and sleepless nights. They fought to rescue every person trapped in the rubble, and then searched for months to find the remains of the fallen.

The love and loyalty of our 9/11 responders knew no bounds. Today, we are deeply honored to be in the presence of more than 60 of these exceptional heroes. They answered terror with the emotional strength of true American warriors. Would every 9/11 responder please stand up? Please, all you first responders.  Wow. Great. Thank you. Thank you, fellas. Great-looking group of people you are. Great-looking group of people. Thank you very much. You inspire all of humanity, and you know that.

We’re also greatly moved to have with us families of our fallen heroes. Our nation owes each of you a profound debt that no words or deeds will ever repay. But we can and we will keep our nation’s promise to you.

In a few moments, I will sign the 9/11 Victims Compensation Fund. This law makes permanent the financial support for families who lost precious loved ones as a result of September 11th attacks. It also provides pensions for those who are suffering from cancer and other illnesses stemming from the toxic debris they were exposed to in the aftermath of the attacks. Many of those affected were firefighters, police officers, and other first responders. And I was down there also, but I’m not considering myself a first responder. But I was down there. I spent a lot of time down there with you.

Since September 11th, we have lost more than 2,000 first responders and survivors to 9/11-related cancers and illnesses. Currently, thousands of men and women are battling cancer and other illnesses due to 9/11. We pledge to stand by the families of those affected, today and every day. We will stand with you.

I want to thank lawmakers in both parties for working with common purpose to pass this vital and critical legislation.

Here with us for this signing ceremony are the three families whose loved ones are memorialized in the title of this bill.

New York Police Department Detective James Zadroga spent more than 450 hours serving at Ground Zero. In 2006, James died from a lung disease. To his father Joseph, and his daughter Tyler Ann, who join us: Detective Zadroga’s heroism will uplift our nation forever. He won’t be forgotten. We will always remember what he did for us. Please stand up. Please. Please. Thank you. Thank you very much.

Here with us today is Ray’s wife Caryn, his daughter Taylor, and his son Terence, now a New York City firefighter. Please, stand up. Good. Very good. Thank you. And I know Ray must be watching over you, looking down right now from heaven, on this beautiful Rose Garden. Very, very proud of you. Thank you. Thank you very much.

I want each of you to know that America is holding you in the arms of its wonderful, wonderful heart. And we’re all grieving by your side. Our whole nation prays and pays tribute to the incredible life and legacy of Detective Alvarez — how hard he worked and how much he suffered. And we really want to thank him. He was really something. People understood it very well. It’s really great. Thank you.

We have an obligation, and it’s a sacred obligation, to the families and first responders of 9/11. Here with us today is Chief John Joyce, former fire chief of the Midtown Manhattan firehouse. On September 11th, 15 of his men raced into the ashes of hell and gave their lives. To this day, Chief Joyce still mentors many of their 28 children.

Chief Joyce spent seven months working at Ground Zero. In 2011, he was diagnosed with cancer. He has also endured other severe 9/11-related illnesses. But the Chief is a fighter. He is definitely a fighter. As he says, because of this bill, he does not have to fear for the families of his firehouse whose loved ones made the ultimate sacrifice. Chief Joyce, you have our everlasting gratitude. Please, Chief. Thank you. Good. Thank you, Chief. Thank you for being here. And say hello to everybody.

To every 9/11 hero, you poured out your heart, your sweat, your soul, and everything you had for your country. You ran toward the wreckage, into a ball of flames, like, frankly, nobody in this country had ever seen. You searched for survivors. You went back day after day and night after night to save lives and return the fallen to their families, to rebuild and recover, and to show the entire world that nothing will ever break America’s spirit.

Over the last two decades, you have endured hardship with amazing grace and incredible grit. Through it all, you care and you work, and you love, and you will always remember all of those great families. You lift up our communities and you remind us all what it means to stand united as “one nation under God.”

For your entire lives, you have gone far beyond your duty to us, and today we strive to fulfill our sacred duty to you.

Thank you, everybody. Thank you very much.