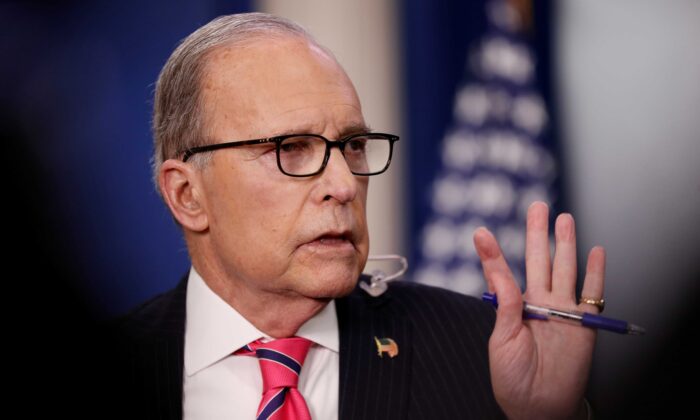 Director of the National Economic Council Larry Kudlow speaks to reporters inside the Brady Press Briefing room at the White House on Feb. 13, 2020. (Tom Brenner/Reuters)
AMERICA

The extra $600 per week was included in the $2.2 trillion CARES (Coronavirus Aid, Relief, and Economic Security) Act, which was passed in March to offset economic losses incurred during the CCP virus pandemic lockdown.

“The $600 plus, that’s above the state unemployment benefits they will continue to receive, is in effect a disincentive. I mean we’re paying people not to work, it’s better than their salaries would get,” Kudlow told CNN on June 14.

The extra funds “might have worked for the first couple months,” but “it will end in late July,” he said. The additional checks aren’t needed, as a number of businesses have started to reopen after remaining shuttered for months.

In addition, the White House is aiming to provide incentives to get people back to work, including smaller checks that “still provide some kind of business for returning to work.”

“I think we are on our way, we are reopening, businesses are coming back, and therefore jobs are coming back. And we don’t want to interfere with that process,” Kudlow told CNN. He noted that some people might be trying to get back to work, but due to the current state of the economy, they can’t find a job.

“I think people want to go back to work. I think they welcome the reopening of the economy. I think they’re anxious to get out and about,” Kudlow said.

“However, at the margin, incentives do matter. And so we have heard from business after business, industry after industry, and there’s already some evidence that this effect is taking place. Now, mind you, let me repeat, we are not going to remove unemployment benefits. That will still continue. And there will be some return-to-work benefit. It won’t be quite as substantial.”

It comes as the White House has expressed a willingness to pass legislation to dole out more direct payments to Americans.

White House economic adviser Kevin Hassett told the Wall Street Journal last week that the odds of another piece of legislation is “very, very high.” Meanwhile, President Donald Trump said on June 5 that he will “be asking for additional stimulus money.”

The Bureau of Labor Statistics’ latest jobs report showed that the economy gained jobs in May, although more than 40 million Americans have filed for unemployment benefits during months of lockdowns.