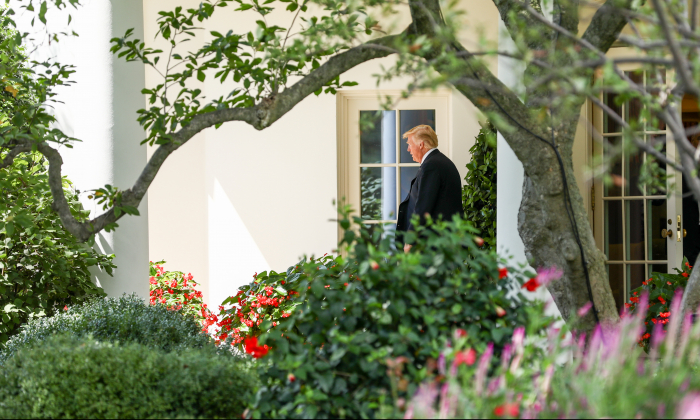 The Trump administration took additional steps on Oct. 3 to further reject the purported binding authority of the international courts, while asserting the sovereignty of the United States on the world stage.

In separate announcements, Secretary of State Mike Pompeo and national security adviser John Bolton said that Washington is quitting a pair of treaties in response to recent politicized cases brought before the International Court of Justice (ICJ) by Iran and Palestinians.

Pompeo declared that Washington is tearing up a 1955 Treaty of Amity with Iran in response to Tehran’s case before the ICJ, which argues that the United States violated the treaty by imposing sanctions on the Islamic regime.

Shortly afterward, Bolton said at the White House that President Donald Trump has decided to withdraw from an optional dispute resolution protocol of the Vienna Convention of Diplomatic Relations. According to Bolton, Palestinian leaders were using the protocol to bring another politicized case against the United States.

“The United States will not sit idly by as baseless politicized claims are brought against us,” Bolton said.

Less than a month ago, the White House issued a severe rebuke to the International Criminal Court (ICC), declaring the supranational body illegitimate. Washington threatened to retaliate if the ICC’s personnel and abettors attempt to prosecute citizens of the United States or its allies. Bolton told reporters that the dual actions on Oct. 3 are related to the administration’s rejection of the ICC.

President Ronald Reagan responded in similar fashion to Nicaragua’s politicized use of the ICJ in the 1980s, ordering the withdrawal from an ICJ provision and quitting a treaty with Nicaragua, and President George W. Bush likewise withdrew from a provision of the Vienna Convention in 2005 in response to the ICJ’s “interference in our domestic criminal-justice system,” Bolton said.

Pompeo announced the withdrawal from the amity treaty with Iran just hours after the ICJ ruled that Washington’s sanctions are in violation of the 1955 treaty. The court, which doesn’t have jurisdiction over the United States, ordered the Trump administration to ensure that sanctions against Iran, due to be tightened on Nov. 4, don’t affect humanitarian aid or civil aviation safety.

Iran’s Foreign Ministry said the court’s decisions “proved once again the Islamic Republic is right and the U.S. sanctions against people and citizens of our country are illegal and cruel.”

Pompeo called Tehran’s case before the court “meritless” and accused the Islamic regime’s leaders of abusing the ICJ for political purposes. Trump pulled the United States out of the multinational Iran deal earlier this year and reimposed punitive sanctions in a bid to force the regime to give up its nuclear and ballistic missile programs.

Pompeo told reporters that the United States should have quit the amity treaty long ago, considering that Iran had frequently violated its terms.

“This is a decision, frankly, that is 39 years overdue,” Pompeo said. “Given Iran’s history of terrorism, ballistic missile activities, and other malign behavior, Iran’s claims under the treaty are absurd.”

Pompeo also blamed Iran for recent escalating threats to U.S. diplomatic sites in Iraq, characterizing the assaults as a response to Washington’s efforts to constrain the Islamic regime’s behavior.

“Our intelligence in this regard is solid. We can see the hand of the Ayatollah and his henchmen supporting these attacks on the United States,” Pompeo said.

“I hope that Iran’s leaders will come to recognize that the only way to secure a bright future for its country is by ceasing their campaign of terror and destruction around the world.”

The secretary of state ordered the relocation of embassy personnel from Basra, Iraq, on Sept. 28. He noted that the United State will continue delivering clean drinking water to Basra’s 750,000 residents. The State Department is working closely with the Treasury to ensure that humanitarian transactions and aid “can and will continue” despite the sanctions.

President Dwight Eisenhower signed the amity treaty with Iran in 1955, long before the 1979 Islamic revolution that turned the two countries into arch-enemies. The treaty consists of 23 articles which establish peace between the two nations and friendly terms for travel, trade, and consular relations.