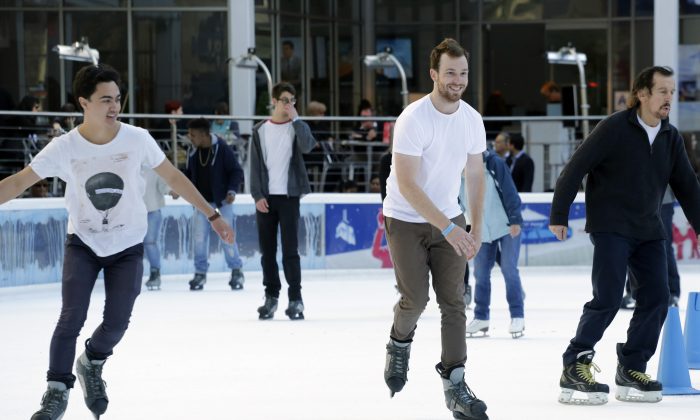 Men in T-shirts skate around the ice rink in Bryant Park, Tuesday, Dec. 15, 2015, in New York. The region is experiencing unseasonably warm weather this week. (AP Photo/Mark Lennihan)
US

Most people will not see a white Christmas this year, according to the latest weather outlook for December 25.

Unusually high temperatures have been common across the eastern U.S., with people venturing out on some days with t-shirts where in years past they would need a jacket, scarf, hat, and gloves.

The latest forecast indicates that snow will not fall in the majority of states, though it is likely or at least possible for some northern and western states.

The meteorologists at Accuweather are predicting in their latest outlook that only eight states–Minnesota, North Dakota, South Dakota, Nebraska, Colorado, Wyoming, Alaska, and Idaho–are likely to see snowfall over significant portions of the state.

Residents in six states–New Hampshire, New York, Michigan, Oklahoma, Texas, and California–are pegged as having at least a chance of snow.

The other 25 states are fully labeled “not likely” to see snow on Christmas.

The Weather Channel’s updated forecast on December 15 is even more doubtful on snow, with only 13 states labeled mostly likely to get snow, and six others labeled possible at all.

The forecast says that the other 31 states are not expected to receive any snow.

“The combination of a mild weather pattern and warmer-than-normal ocean temperatures strongly argues against accumulating snow in areas from Washington, D.C., to Boston.”

Even in places that do see snow, it will mostly melt quickly because of warm ground.

The National Weather Service is predicting temperatures of up to 70 degrees Fahrenheit in the Midwest, and much warmer temperatures than usual across the nation.

If precipitation does happen in some states, then rain will fall instead of snow.

“Approaching the final two weeks of December, many folks are wondering whether they will see a White Christmas. Looking at a snapshot of our latest temperature forecast for Christmas Day, we are predicting widespread temperatures in the 50s, 60s, and 70s across the eastern U.S.,”  noted Michael Ventrice, a forecaster at WSI Corporation, in a blog post.

“This means it will likely be way too warm for snow here in the East. Cherry picking a city, our current Max Temperature Forecast for New York City (65F) on Christmas Day would break the all-time warmest Christmas set back in 1982 by 1 degree. The New York City warmth will not be alone… records could be broken across many cities in the eastern U.S. on Christmas Day. Now there’s still some room for the forecast to change of course but it’s looking quite balmy.”

The higher than average temperatures across the U.S. are due to the Super El Nino event in the Pacific Ocean combined with the stronger than average low pressure about the North Pole.

The term El Nino refers to the large-scale ocean-atmosphere climate interaction linked to a periodic warming in sea surface temperatures across the central and east-central Equatorial Pacific, according to the center.

El Nino is one part of of the fluctuations in temperature between the ocean and atmosphere as they interact with each other, with its opposite phase known as La Nina, or the cold phase.

El Nino happens when the trade winds that typically blow towards the west across the tropical Pacific relax in the central and western Pacific.