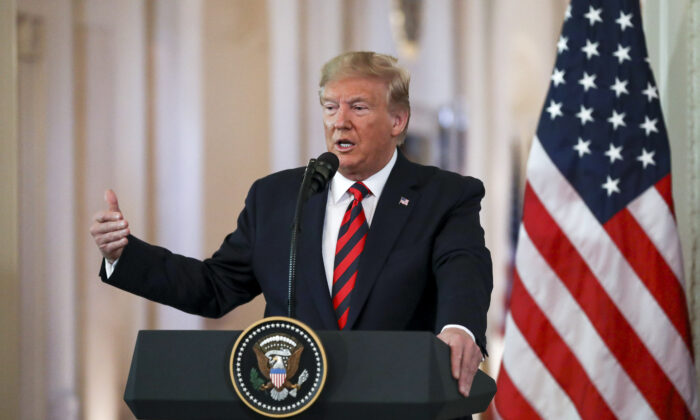 President Donald Trump at a press conference in the East Room of the White House in Washington on Sept. 20, 2019. (Charlotte Cuthbertson/The Epoch Times)
Politics

The attorney for the whistleblower at the center of an impeachment inquiry against the president said his client “drafted the complaint entirely on their own,” after accusations that a Democratic congress member had provided assistance to the person in creating the document.

“The Whistleblower drafted the complaint entirely on their own,” Mark Zaid, the lawyer for the anonymous whistleblower, said in an emailed statement to The Epoch Times. “Legal counsel Andrew Bakaj provided guidance on process but was not involved in the drafting of the document and did not review it in advance.”

“In fact, none of the legal team saw the complaint until it was publicly released by Congress,” he added. “To be unequivocally clear, no member or congressional staff had any input into or reviewed the complaint before it was submitted to the Intelligence Community Inspector General.”

This comes after a report from the New York Times claimed that House Intelligence Committee Chairman Adam Schiff (D-Calif.) had received an early account by the whistleblower days before the person filed the complaint (pdf) that accused President Donald Trump of acting improperly during a call with Ukrainian President Volodymyr Zelensky. The complaint was filed in August and made public in late September.

According to the complaint, the whistleblower alleged that Trump had abused his power by pressuring Zelensky to investigate a political opponent—2020 Democratic candidate Joe Biden and his son, Hunter Biden. The whistleblower relied on secondhand information and media reports and did not have direct knowledge of the call.

A day after House Speaker Nancy Pelosi (D-Calif.) launched the impeachment inquiry, the White House released a transcript of the Trump-Zelensky July 25 phone call. The transcript revealed that Trump had asked Zelensky to look into a technology firm that was hired by the Democratic National Committee, Crowdstrike, and look into Biden’s dealings with Ukraine. In 2018, Biden boasted that he pressured then-Ukrainian President Petro Poroshenko in 2016 to remove a prosecutor in charge of a probe of Ukrainian energy company Burisma, where Biden’s son was a board member.

A spokesman for Schiff appeared to confirm that the report, saying “Like other whistle-blowers have done before and since under Republican and Democratic-controlled committees, the whistle-blower contacted the committee for guidance on how to report possible wrongdoing within the jurisdiction of the intelligence community.”

When asking about the report on Oct. 2, Trump told reporters he was not surprised that Schiff had knowledge about the whistleblower complaint before it was filed, calling it a scandal.

“Well, I think it’s a scandal that he knew before. I’d go a step further: I think he’s probably helped write it,” Trump said.

Later at the press conference, Trump repeated his criticism toward Schiff for fabricating parts of the transcript of Trump’s call during a committee hearing.

“He took that perfect conversation I had with the Ukrainian President, and he made it into a total lie. It was a total fabrication,” he said.

Many Republicans responded to the New York Times report. House Minority Leader Kevin McCarthy (R-Calif.) shared the report on his Twitter writing: “Chairman Adam Schiff just got caught orchestrating with the whistleblower before the complaint was ever filed. Democrats have rigged this process from the start.”

BREAKING –> Chairman Adam Schiff just got caught orchestrating with the whistleblower before the complaint was ever filed. Democrats have rigged this process from the start.https://t.co/oMdSGByYtf

Similarly, Rep. Mark Meadows (R-N.C.) wrote: “So the whistleblower was communicating with team Adam Schiff behind the scenes? Well. This explains a lot, indeed.”

Trump had repeatedly criticized the whistleblower, saying that he wanted to meet with him or her.

“He wrote a vicious conversation. In other words, he either got it totally wrong, made it up, or the person giving the information to the whistleblower was dishonest,” Trump told reporters. “This country has to find out who that person was because that person is a spy in my opinion.”

Congress members from both sides of the aisle have expressed support to protect the identity of the whistleblower.