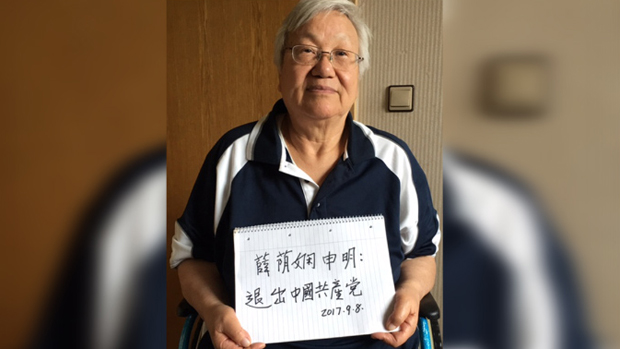 Xue holds a notebook declaring that she withdraws from the Chinese Communist Party on Sept. 8, 2017. (RFA)
Asia & Pacific

The career of an Olympic doctor—who had blazed a trail to success at an early age—came to a screeching halt when she refused to inject the top Chinese gymnasts with steroids. After almost two decades of mistreatment, she is seeking asylum in Germany and has severed all ties with the Chinese Communist Party.

Xue Yinxian, 79, was born in a revolutionary family, and her early life as a privileged “second generation red”—child of veteran officials—went just as expected.

In her 20s, she entered the General Administration of Sport of China, the country’s top sports bureau. She later became the personal doctor for Olympians such as Li Ning, known in China as “Prince of Gymnastics,” and Lou Yun, a two-time gold medalist at the Olympic Games in 1984 and 1988. She was also the chief doctor overseeing the 11 national teams.

Everything changed in the late 1970s when a wave of state-sponsored doping hit China’s sports scene. Sports doctor Chen Zhanghao had been sent to study the advantages of stimulants and returned to China proclaiming their power to combat fatigue.

Shortly afterwards, Xue said all athletes were required to take the drugs.

Xue said athletes were often not told what they were injected with—steroids and growth hormones were referred to as “special nutritional medicine” and promoted across the country as a part of “scientific training.”

“The campaign ruined our nation’s athletes for life,” Xue said.

As a physician, Xue saw the danger of the drugs being administered more clearly than most of her contemporaries. She said the side effects included severe liver damage and brittle bones, as well as liver and brain cancer. But the teenage girl athletes paid the steepest price.

“The ‘powerful energizer’ did get them through the door to the professional team.” Xue said. “I saw some like that—she broke the provincial records…but now she is penniless and has mental problems.”

What bothered Xue most was the lack of drug regulations. “At least on the national team there were medical doctors watching them taking doses and taking responsibility for it, but who cared about the regional teams?”

In July 1988, two months before the Seoul Olympic Games, Xue was asked to inject gymnast Li Ning with performance-enhancing drugs.

She declined and retaliation followed swiftly.

While cooperative doctors enjoyed lucrative rewards and promotion, Xue was removed from her post. Her email and phone were monitored. A police car was permanently parked outside of her home.

“Li Ning is a celebrity,” she had told officials.” If this should be found out, it’s not only you, me, and Li Ning who would lose face, our national image would be gone as well.”

“What the sports committee wanted were champions, not athletes,” Li Ning told Southern Weekly in 2012.

Before the 2008 Beijing Olympics, she got a visit from the vice director of the state sports bureau, who warned her not to “say anything unfavorable against the nation,” according to Yang Weidong, Xue’s son and a contemporary artist.

Xue’s husband, who had just had brain surgery, got into a physical confrontation with the official, during which he fell to the ground and again injured his head. He died three months later.

In 2012, Xue gave an interview to Australia’s Fairfax Media in which she blew the whistle on China’s state-enforced doping, the first time the regime had been directly implicated in the practice.

Xue has suffered two strokes, and once lost her ability to speak. When she sought treatment at Beijing Hospital and China-Japan Friendship Hospital, two of the major state-run hospitals in Beijing, she received nothing more than examinations.

“For two years they wouldn’t treat my mom,” said Yang Weidong. “The hospitals didn’t specify the reasons, but whenever we arrived at the hospital, the police would also be there.”

Before Xue was allowed to leave the country to seek medical help, her home was searched  as the police attempted to find the 68 work journals that Xue wrote as a medical doctor—journals that help document her allegations of state-sponsored doping.

The police were a step too late: months earlier Xue’s family had transported the journals overseas.

Xue escaped to Germany in June with her her son and daughter-in-law, and applied for asylum. All three were transferred to a refugee camp in Mannheim on Aug. 29.

Xue told Radio Free Asia that she had stopped paying Party membership dues after her husband’s death. On Sept. 8, 2017, she had a picture taken of her holding a notebook on which she had written, “Xue Yinxian declares: [I] withdraw from the Chinese Communist Party. Dated 9.8.2017.”

With that gesture, Xue cut her last ties to the Chinese regime. To date, around 280 million Chinese have chosen to repudiate their connections with the Party and its affiliated organizations.

On Aug. 28, the abuse Xue has fought against was again in the news. The Court of Arbitration for Sport confirmed that two Chinese weightlifters were guilty of doping and stripped them of the gold medals they had won at the 2008 Beijing Olympics.

The finding against the two weightlifters is the latest instance of the doping scandal that has shaken Olympic sports. Retesting of samples from the 2008 and 2012 Olympics in Beijing and London found about 50 doping cases, resulting in at least 25 medals beomg voided—most cases involved athletes from the former Soviet Union, according to the Associated Press.

China, one of the top countries in weightlifting, won seven medals at the 2016 Olympic Games in Rio de Janeiro, including five gold.