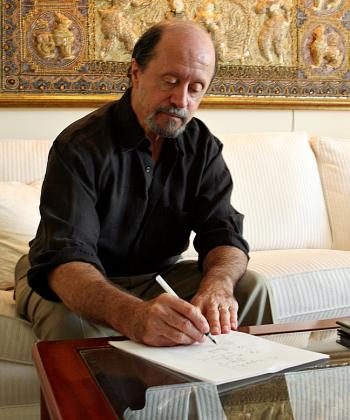 Brian McAdam kept meticulous records of his investigations when he discovered corruption in the Canadian Embassy in Hong Kong from 1989 to 1993. (Samira Bouaou/Epoch Times)
International

Brian McAdam wanted to do the right thing and he expected that his government would stand behind him.

Rather than being rewarded for his efforts to expose the corruption within the Canadian Foreign Service, McAdam says he was treated like a pariah, pressured into leaving his job, and then slandered.

In other words, he was hung out to dry while the bad guys whistled all the way to the bank. And in this case the bad guys were the triads (Chinese mafia), the Chinese Communist regime, which McAdam says is linked to the triads, and even some Canadian officials.

“I wanted to stop Chinese criminals and spies from trying to destroy our country,” McAdam says, referring to his investigations into a visas-for-sale racket while working as counselor in consul in Hong Kong from 1989 to 1993.

A recent series of articles in the Ottawa Citizen (part three has yet to be published) marks the first time his story has been published “in its entirety, in mainstream media, in Canada,” says McAdam. “Parts were published before but it has been difficult for me to tell the story, plus it is complicated. It needs a book.”

He adds that the Canadian media “have been very remiss and they have perpetuated a lot of the myths about China and not dealt with the reality. So there has been incredible underreporting of events in China, which I think has enabled this Communist regime to become as powerful as it has.”

While in Hong Kong McAdam noticed that illegal visas were being issued and all of his intelligence information was being removed from his computer. After he returned to Canada, “seven RCMP officers investigated for seven years and said they could not [identify the problem].”

He says that at the time he was dismayed as he watched the corruption continue without any consequences, as his notes and research “disappeared” followed by a smear campaign that left him without a job or allies.

Possibly the worst part of all was his betrayal by those in the American embassy, members of the RCMP, former colleagues, and his former managers. In the end, he suffered a mental breakdown from the severe pressure he was under.

McAdam says the whistleblower legislation introduced by the Conservatives that he lobbied so hard for turned out to be a disappointment. Although they tried, he says, the government hasn’t yet got it right.

McAdam believes the government should be investigating every allegation of corruption in the Canadian Embassy in Hong Kong, the Foreign Affairs department, the RCMP, and CSIS as he has repeatedly asked it to do.

In the 15 years since he first blew the whistle, McAdam has campaigned to educate the government and the police about the insidious schemes he says the Chinese Communist regime carries out on Canadian soil.

However, he is still waiting for even an acknowledgment that problems of corruption and criminal infiltration of government and businesses exist, let alone a sign that Ottawa is willing do something about it.