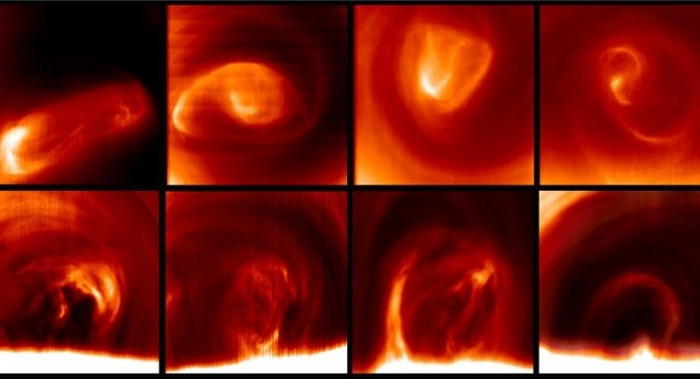 The south polar vortex of Venus changes shape every day. The images at the top of the figure show the upper cloud of Venus, 65 km above the planet's surface. The images at the bottom depict the south polar vortex of Venus 20 km further down showing the vertical extension and variability of the atmospheric phenomenon. (Grupo de Ciencias Planetarias - Planetary Science Group-, UPV/EHU)
Science

The giant cyclone spinning around the south pole of our neighboring planet is far more unpredictable than scientists realized, according to a new Spanish study.

Other planets, such as Earth, have vortices in their atmospheres near the poles, but they don’t move and change as quickly as those on Venus, which change size and shape every day.

The astronomers used a special instrument on the Venus Express spacecraft that allowed them to see the different layers in the atmosphere. They were surprised to discover that the vortex has two separate centers, one in each of its layers, that wander around independently of each other.

“We thought that the centers of the vortex at different altitudes formed only a single tube, but that is not so,” Itziar Garate-Lopez, head researcher at the UPV/EHU’s Planetary Science Group, said in a press release.

“Each center goes its own way, yet the global structure of the atmospheric vortex does not disintegrate.”

Another unusual feature of Venus’s atmosphere is the super-rotation, which means that the atmosphere rotates much faster than Venus itself.

“We’ve known for a long time that the atmosphere of Venus rotates 60 times faster than the planet itself, but we didn’t know why,” Garate-Lopez said.

“The difference is huge; that is why it’s called super-rotation. And we’ve no idea how it started or how it keeps going.”

The new study might help scientists determine how the super-rotation is related to the vortices. They are still unable to explain why the vortices change shape so quickly and wander around the pole at random.

The paper was published online in the journal Nature Geoscience on March 24.