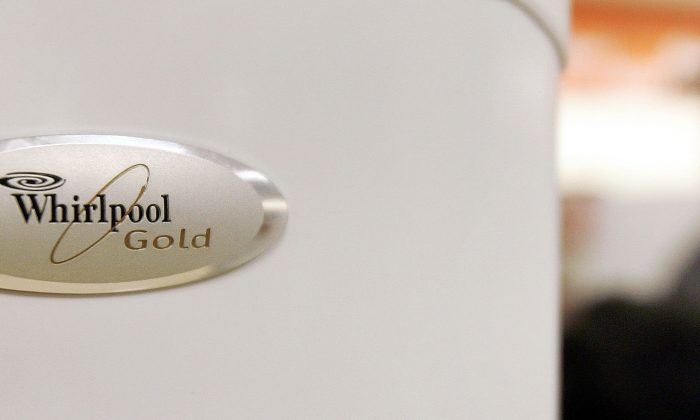 A Whirlpool logo is seen seen on a refrigerator at a Sears store in Niles, Illinois on May 12, 2006. (Tim Boyle/Getty Images)
US News

A Whirlpool refrigerator exploded inside a house in Florida over the weekend, causing significant damage to multiple rooms.

Mark Ligondie said that he was sleeping when he heard a bang, prompting him to sprint from his bedroom to the kitchen.

“There were fumes coming everywhere,” Ligondie told WPTV, noting that the odor was so strong that it stung his eyes.

“The fridge exploded and if you look at this angle right here it expanded and expanded so much it bent the metal of the stove,” he said. “It’s surreal.”

The Whirpool refrigerator was only four months old.

The explosion sent pieces throughout the kitchen and surrounding rooms, leaving cracks in the ceiling and walls. Luckily, nobody was injured.

Ligondie’s next door neighbor, Joshua Perez, rushed over to help after hearing the explosion and smoke alarm, saying the incident prompted him to schedule an appointment to check his own fridge.

“For them to say we’ve never seen this, this is something we have never seen in our life is kind of alarming,” he said.

In a statement, Whirlpool said it was investigating the explosion.

It’s not clear what made the fridge explode. According to a Whirpool owner’s manual (pdf), there is an explosion hazard. “Keep flammable materials and vapors, such as gasoline, away from [the] refrigerator,” it states. “Failure to do so can result in death, explosion, or fire.”

This is not the first report of a Whirlpool fridge exploding, however.

A Whirlpool fridge was reported to have exploded in the village of Fernandina in Florida in 2015.

A Whirlpool Corporation public relations official told a local outlet, the Villages News, that she wasn’t sure if the company had received other reports of exploding fridges at the time.

“I am not the expert,” said Kristine Sherman, Whirlpool’s senior manager of global media and public relations.

She added, “We take this report very seriously and wish to look into the situation.”

That explosion was so bad that the couple who lived in the house had to move out immediately, reported the outlet, first staying with friends then moving into a rental near the home.

Two washers blew apart in Texas in 2015, reported the Dallas Morning News. Experts told the outlet that while flammable materials can cause explosions, the more likely cause was a failed bearing, which threw off the concrete counterweight used to balance the spinning drum.

“The concrete is ballast to hold the machine down in the spin cycle,” one expert said. “Otherwise it would walk around the room.”

One man said that his washer died in the same manner. “The counterweight used to balance the drum came off, and the machine essentially beat itself to death,” he said.

Steve Wojs, owner of the Adam the Answerman appliance parts store, said that it appeared that the balancing weights broke loose from the outer tub. “Once you lose the weight, the outer tub flies all around and shakes violently,” he said.

Exploding Whirlpool washers have been reported at other times as well. A Minnesota woman said that her Whirlpool washer exploded, also in 2015. A number of parts flew out during the explosion and struck her, giving her a concussion, reported KARE; many people who commented on her Facebook post said that their washers have exploded as well.