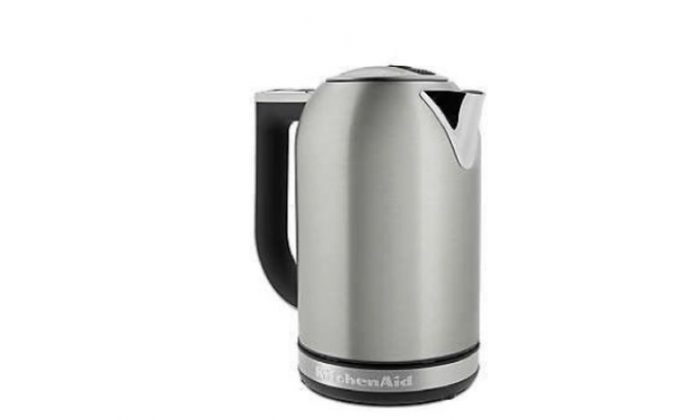 Appliance manufacturer Whirlpool announced it is recalling about 40,000 KitchenAid electric kettles due to a burn hazard.

The Consumer Product Safety Commission said the Chinese-made electric kettles aren’t safe after it received 79 reports of the handles detaching and three reports of burn injuries. It can cause “hot contents to spill, posing a burn hazard,” the agency said.

“This recall involves KitchenAid 1.7 Liter Electric Kettles. The kettles were sold in stainless steel, red, black, white, liquid graphite and cocoa silver. Model numbers and serial numbers are located on the bottom of the kettle. KitchenAid is written on the front of the kettles,” the agency added.

Consumers, the agency said, should stop using the kettles immediately and contact Whirlpool for a replacement.

They were sold at Bed Bath & Beyond, Dillard’s, Fry’s Electronics, Kitchen Kaboodle, Kohl’s, Navy Exchange, Target, Williams Sonoma, other retail stores, and online at Amazon.com as well as other online retailers from September 2013 until February 2018. They sold for $100 to $120.

According to Good Housekeeping, people have been complaining about the kettles for some time.

“After 6 months of use, the handle broke off after I boiled a full pot of water. I could have been badly hurt. The handle just detached off the body without prior indication it was starting to break. I could have been burned so badly. It literally just happened. The lid detached too,” one reviewer wrote on Amazon in June 2017, according to the report.

“The handle was slightly loose at the bottom, right out of the box. As I used it, the bottom part of the handle was clearly starting to detach from the body. Very disappointing. It would seem that Kitchen aide is cutting corners,” said another in 2014. Many deemed it “unsafe,” the report stated.