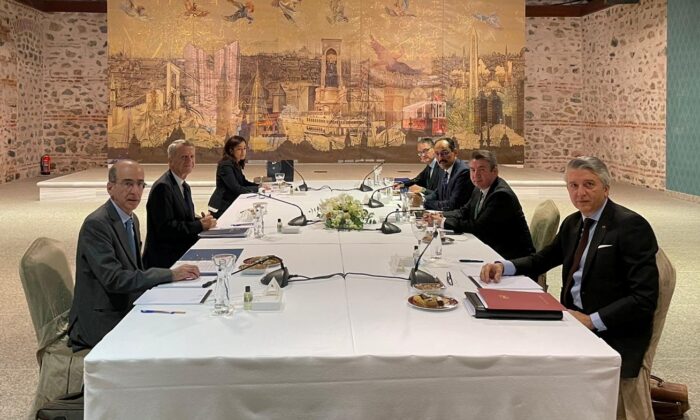 Representatives of Turkey and Greece attend a meeting as part of the bilateral talks on the maritime disputes in Istanbul, Turkey, on Jan. 25, 2021. (Turkish Foreign Ministry/Handout via Reuters)
Viewpoints

While Ukraine Burns, Turkey Ponders a War With Greece

Turkey has been preparing a major military gamble to restore the plummeting prestige of President Recep Tayyip Erdogan, who—unless he can produce a miracle—could be swept from office within a year.

Right now, there is little he seems willing to do about Turkey’s economic crisis. Inflation in Turkey reached a 24-year high of 78 percent in June 2022; the value of the lira continued to be weak (17.68 to the U.S. dollar in July 2022), and soaring energy imports and rising energy costs have brought a balance of payments crisis and pain at the consumer levels. Turkey’s economic miracle came and went, and the voters have become impoverished again.

Erdogan may soon initiate a war with Greece over the sovereignty of traditionally (and legally) Greek islands in the Aegean. It would do so using the “cover” or distraction of the Russia-Ukraine conflict, believing that Turkey’s critical position to NATO/United States in that war means that it cannot effectively be sanctioned for its actions.

The Turkish government under Erdogan has certainly begun preparations for such a war, highly conscious of the fact that the Hellenic Armed Forces have belatedly begun steps to achieve a degree of force capability that could match, or even overmatch, the capabilities of the Turkish Armed Forces in some areas: new warships and new combat aircraft (Rafales and F-35s).

Erdogan knows that he has a limited window of opportunity before Greece redresses much of the military imbalance it has had with the Turkish Armed Forces and before the 2023 presidential elections, which, unless manipulated, would likely sweep him from office.

Turkey has, after all, escaped these past 48 years without censure for its 1974 invasion and subsequent occupation of the northern 37 percent of Cyprus. Erdogan has consistently played on the fact that Turkey could move away from its supposedly Western orientation—cemented by Kemal Mustafa Ataturk after 1920—and “realign” with Russia or the Shanghai Cooperation Organization (SCO) Eurasian bloc.

That consistent threat, however, has worn as thin as Turkey’s economy. Erdogan has proven to be as highly conscious of the chafing position that Turkey has endured in recent years because of its high dependency on Russia for trade as he has been on the ambiguous outsider status, which Turkey endures with the European Union (EU) and even NATO.

Erdogan may move to a third position: alignment with the Middle Eastern and Central Asian states. But those regional states were happy to have thrown off Ottoman influence with Turkey’s defeat in World War I. So Erdogan vacillates between these imperfect options. He is now in his most desperate position since he became prime minister in 2003.

Turkey is less than a year away from its second election—on June 18, 2023—since the introduction of an executive presidential form of government. Still, it will be more a judgment on its first executive president than on the system itself. Erdogan is being judged on a dramatically declining economy and on the series of failed attempts to recreate the glories of the pan-Turkism and Ottoman past.

As a result, Erdogan has a limited time in which to recover his position, either electorally or, due to a national security emergency, through the imposition of some form of force majeure to nullify or prevent the next election. Erdogan, after all, did contrive to stage a “failed coup attempt” on July 15–16, 2016, in order to draw out and suppress his political and military rivals, in much the same manner that Adolf Hitler’s Nazis staged a contrived putsch between June 30 to July 2, 1934, to consolidate power under the pretext of an impending coup by Ernst Rohm’s Sturmabteilung (SA) paramilitary brownshirts.

Greek Prime Minister Kyriakos Mitsotakis met with Erdogan in March 2022 and seemed to have reached an agreement on Mediterranean security issues. By late April 2022, however, it became apparent that the accord had vanished, and Turkish Air Force violations of Greek airspace over the Aegean Sea reached an “unprecedented level.”

At the same time, Turkish Foreign Minister Mevlut Cavusoglu claimed that Athens had been illegally “militarizing” its island territories in the Aegean. Turkey had, in 2021, petitioned the United Nations with a unilateral view of “demilitarizing” the Aegean islands. Cavusoglu said in April 2022 that Greek sovereignty over its Aegean territories would be considered “debatable.”

Turkey was, in 2022, seeking to buy new Lockheed Martin F-16 Vipers to shore up its capabilities. This is now a domestic U.S. battle between the defense industry and strategic policy officials concerned over Turkey’s real commitment to NATO. But Washington would welcome an election to remove Erdogan before he could go to war against Greece.