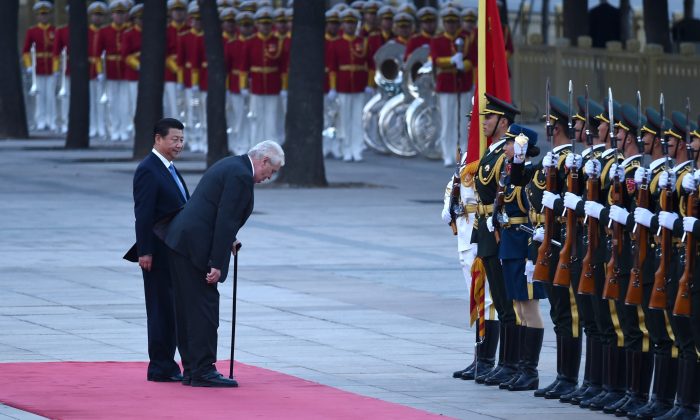 Ignoring the objections of Czech parliamentarians and citizens and the actions of other EU countries, Czech president Miloš Zeman will attend the grandiose military parade that Beijing plans to celebrate the 70th anniversary of China’s victory over Japan in World War II. He is to meet with the Chinese Communist regime’s leader Xi Jinping.

Heads of other EU countries decided to boycott the military parade that is seen as a muscle-flexing gesture by the Chinese regime and a provocation towards Japan. The European Union “pays tribute to the enormous sacrifices made by the Chinese people” but “reconciliation should be paramount,” stated EU spokesperson, according to Politico.eu.

Zeman seems to like to stand out with controversial actions and statements, much to the consternation of a portion of the Czech society and the nation’s parliamentarians. When he visited China for the first time, he told CCTV, China’s official state-run TV, “I am in China to learn how to improve economic growth and social stability,” prompting widespread disapproval across Czech society.

While the Czech government approved this visit to China, some have voted against it or abstained. “China is the country that, when it comes to human rights, cannot be considered as an exemplary regime,” said the Minister of Culture Daniel Herman, citing examples of persecution of Falun Gong practitioners and Christians, according to the media website Lidovky.cz.

China is the country that, when it comes to human rights, cannot be considered as an exemplary regime.
— Daniel Herman, Czech Minister of Culture

This is Zeman’s second visit to China within one year. He has repeatedly emphasized the main objective of the interaction between Czech Republic and China is to boost mutual trade, while publicly denouncing criticizing Beijing for its poor human rights record.

China is the 4th biggest trading partner for Czechs and many Czech entrepreneurs hope they can increase their presence in China. And Chinese businessmen are looking for investment opportunities in the Czech Republic.

The biggest Chinese bank, the Bank of China, opened its first branch in Prague just one day before President Zeman left for China. Among its customers is the richest Czech, Petr Kellner, who has significant business interests in China, according to the major local news website idnes.cz. Kellner provided his private jet to take Zeman home from his trip to Beijing last year.

Since Zeman took office in 2013, Czech exports to China have increased some 20 percent to almost $2 billion a year. Still, only about 1.2 percent of Czech exports go to China and the trade surplus steadily rises in China’s favor with almost $17 billion added between June 2014 and June 2015. That makes it the worst trade balance Czech Republic has with any country.

The president left for China on Sept. 2 and will stay until Sunday. The celebration scheduled for Sept. 3 will see some 10,000 troops marching through the center of the Chinese capital.