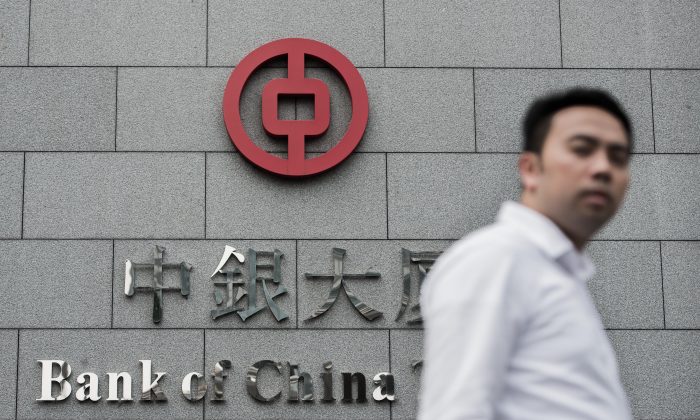 A man walks past the Bank of China Tower in Hong Kong on August 23, 2012. (Philippe LOopez/AFP/GettyImages)
Business & Economy

While We Focus on the AIIB, China Is Increasing Its Power in the Western Financial System

The broad consensus on the topic is that the AIIB will be Chinese dominated but most likely won’t be abused for Chinese political purposes. In addition, China remains adamant, it does not want to challenge U.S. financial hegemony or become a new reserve currency.

And yet, it is setting up the infrastructure necessary to do exactly that:

However, in the background, China is also taking further steps to gain more control within the Western financial system as well.

The International Monetary Fund has recently visited Beijing to assess whether China’s yuan can become part of its international reserve currency, the Special Drawing Right (SDR).

“We welcome and share this objective and will work closely with the Chinese authorities in this regard. As Managing Director Lagarde of the IMF has said, renminbi inclusion in the SDR basket is not a matter of ‘if’ but ‘when,'” David Lipton, first deputy managing director of the IMF said in Beijing.

The inclusion in the SDR can be undertaken without the approval of the U.S. Congress, because it does not involve the increase of China’s voting rights, although that step is likely to follow.

Halfway across the globe from its own gold trading hub in Shanghai, the Bank of China has now been admitted to participate in the London Bullion Market Association’s gold auction, which plays an important part in determining global gold prices.

“We are delighted to welcome Bank of China to the gold auction. The growth in daily volumes coupled with the increase in participation from around the globe, demonstrates strong market support for the independent governance and oversight we have implemented to bring transparency and trust to the gold price auction,” said Finbarr Hutcheson, the president of the Intercontinental Exchange, which oversees the auction.

So despite apparently not having any ambition to become another United States, China is not only setting up a competing infrastructure but is also rapidly gaining more influence within the system. It seems the Chinese regime’s mouthpieces should remember some Western philosophy cultivated throughout the ages: Actions speak louder than words.