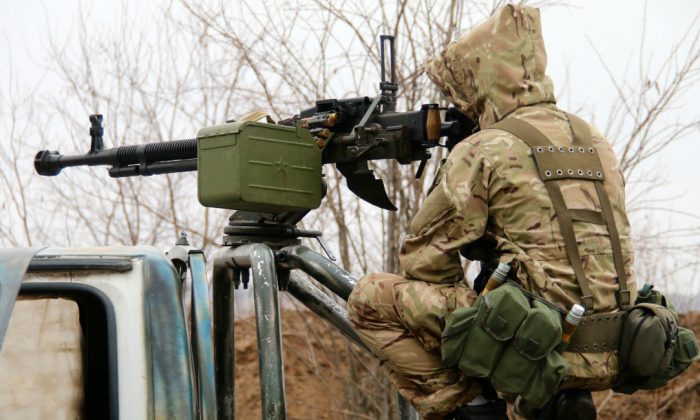 KYIV, Ukraine—Over the weekend, as NATO leaders in Warsaw, Poland, were discussing ways to counter Russian aggression, the conflict in eastern Ukraine concurrently spiked to its worst level in months.

“I don’t think it’s a coincidence,” Stephen Blank, senior fellow for Russia at the American Foreign Policy Council, told The Daily Signal. “It makes sense that it would be related to the Warsaw summit.”

Near the village of Troitskoye in Ukraine’s embattled southeastern Donbas region, the Ukrainian military claimed to have rebuffed an attack by a 23-man reconnaissance force on Sunday. Of the three separatist soldiers captured in the attack, one later died from wounds sustained in battle, according to military reports. The Ukrainian military identified the deceased soldier as Natan Leonidovuch Tsakirov, a Russian citizen from Omsk, according to his passport.

In all, Ukrainian officials tallied 94 combined Russian-separatist attacks on Sunday and 51 on Saturday.

While fighting spiked in the Donbas, Ukrainian President Petro Poroshenko was meeting with NATO leaders in Warsaw to discuss the security situation in Ukraine.

While Stoltenberg said full NATO membership for Ukraine was “not currently on the table,” Poroshenko called Ukraine’s relationship with NATO a “de facto alliance.”

“It is our common responsibility to change Russia’s aggressive behavior,” Poroshenko said. “We are grateful that NATO stands by Ukraine.”

Russia supports the two breakaway territories in eastern Ukraine with weapons, ammunition, and training. And various news reports have shown Russian troops are fighting inside Ukrainian territory in support of separatist forces.

At the Warsaw summit, NATO leaders frequently and directly called out Russia for its actions in Ukraine, which continue to violate Ukraine’s shaky cease-fire, known as Minsk II.

“We condemn Russia’s deliberate destabilization of eastern Ukraine where cease-fire violations occur on a daily basis—often with equipment banned under the Minsk agreements and with casualties every day,” Stoltenberg said.

“Our 28 nations are united in our view that there can be no business as usual with Russia until it fully implements its Minsk obligations,” U.S. President Barack Obama said during a press event in Warsaw on Saturday.

“The language of statements on Ukraine and Russia is a mind exercise that has no impact on the actual Minsk process,” Russian Permanent Representative to NATO Alexander Grushko said Monday during an interview with the Rossiya-24 television channel, according to the Russian news site TASS.

Blank said Ukraine’s deepening ties with NATO and the high-profile dressing down of Russian policy by NATO leaders over the weekend in Warsaw likely prompted Moscow to retaliate with attacks in eastern Ukraine.

“Russia wants to punish Ukraine for moving toward NATO and they want to make clear to NATO that they can take Ukraine any time they want,” Blank said. “Russia’s policy is to try to force Ukraine to fall apart.”

The war in Ukraine has seen two official cease-fires and a renewed truce that went into effect in September 2015—none of which fully took hold.

The most recent cease-fire, called Minsk II, was signed in February 2015 but collapsed days later when combined Russian-separatist forces launched an offensive on the village of Debaltseve, then Ukrainian-controlled. A previous cease-fire had been signed in September 2014 in the Belarusian capital of Minsk, but it too quickly collapsed.

The pace of the more than 2-year-old conflict often ebbs and flows, leading some to speculate that a full-fledged Russian-backed offensive may be looming whenever fighting intermittently surges. Yet, this weekend’s uptick in attacks does not necessarily mean the overall situation in eastern Ukraine is edging toward a major escalation.

“I think it’s part of a pattern,” Blank said. “Whenever NATO does something like this Russia needs to prove that they’re not going to take it lying down.”